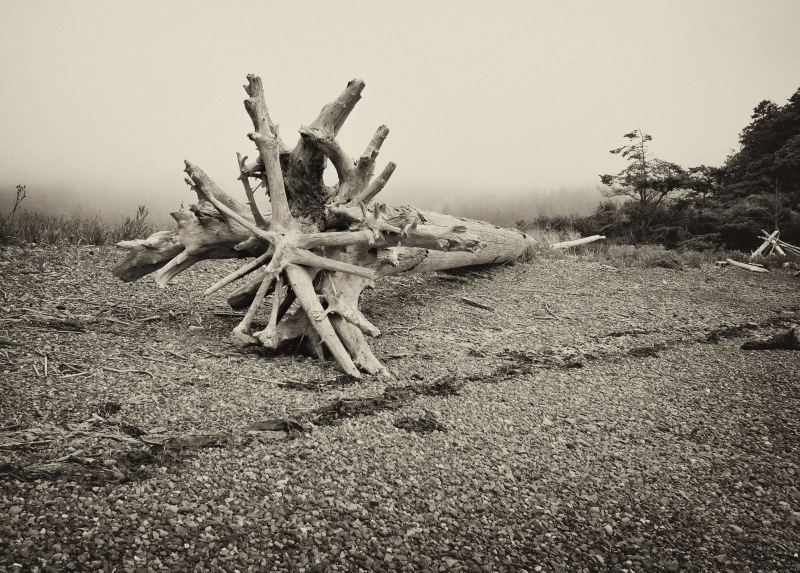 A late May walk on a cool, foggy morning, a favorite place ten minutes from home…

If you fly over this corner of Fidalgo Island in a small plane and look down, you’ll see a bay shaped like the curved knife used for chopping vegetables, sometimes called a mezzluna.  The knife edge is the beach. A rocky cliff takes a bite out of the edge and a long, narrow pier draws a fine line across the blade and into the bay. (A map is below, for reference.)

A bit of lawn disappears into thick woods surrounding the bay; the quiet water is speckled with rocks. To the west are more islands. In the distance, the Strait of Juan de Fuca disappears into the mist. In the off season the pier is deserted, the waters empty but for an occasional kayaker or small boat, the paths lightly traveled. 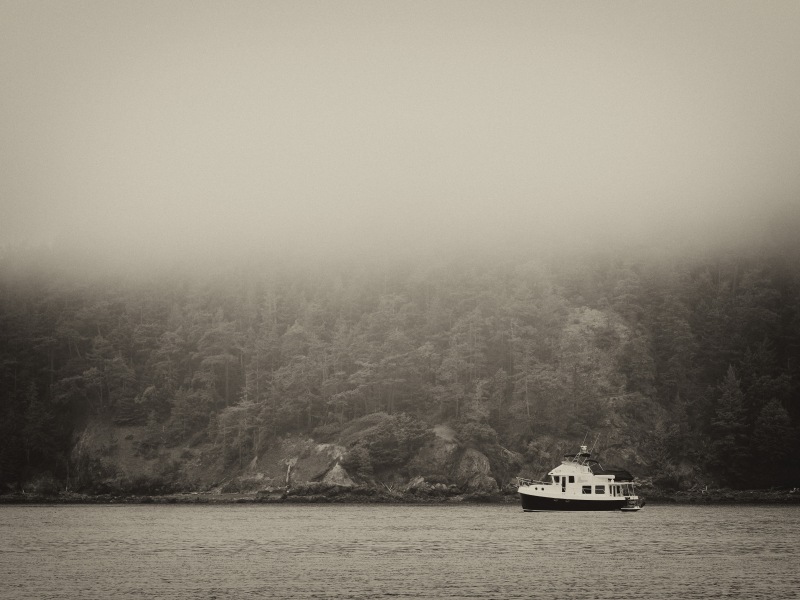 2. At anchor in the fog, Bowman Bay

On this foggy morning there was just one other vehicle in the lot. I was effectively alone. We think of fog as removal: it takes away our ability to see clearly, it muffles sounds and obscures things.

But fog brings not-knowing forward, and what does that do? It returns us to the Wonder.

I’m not sure what’s ahead. I slow down.

4. The path to Lighthouse Point, nearly overtaken by wildflowers and dune grass.

5. The growth of past seasons mixes with the fresh blades of dune grass on a tangled mess of crumbling driftwood. 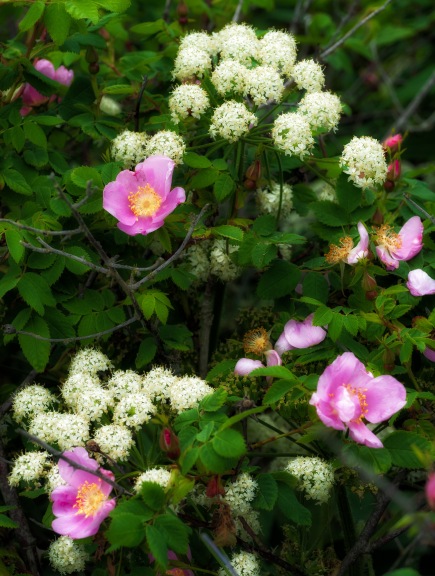 At the south end of the beach is a tombolo, an Italian-derived word for a narrow strip of land connecting an island to the mainland. This tombolo, strung between two bays, connects Lighthouse Point to Fidalgo Island. It’s the kind of place where edges have no edge, dancing with the tides, creating and erasing boundaries with the unpredictability of a butterfly’s flight. One day, masses of seaweed wash up onto the beach in spongy, pungent mounds. Another day a windstorm spills bay water into the marshy wetland. Sands shift and reach into the dune grass that lines a path over the tombolo. Waves cut shallow scoops from the shoreline. Forty-foot logs are tossed about like toothpicks, eventually becoming rooted in place by wildflowers growing around them. The rubbery ropes of Bullwhip kelp scribe messages in the sand alongside dainty racoon tracks. 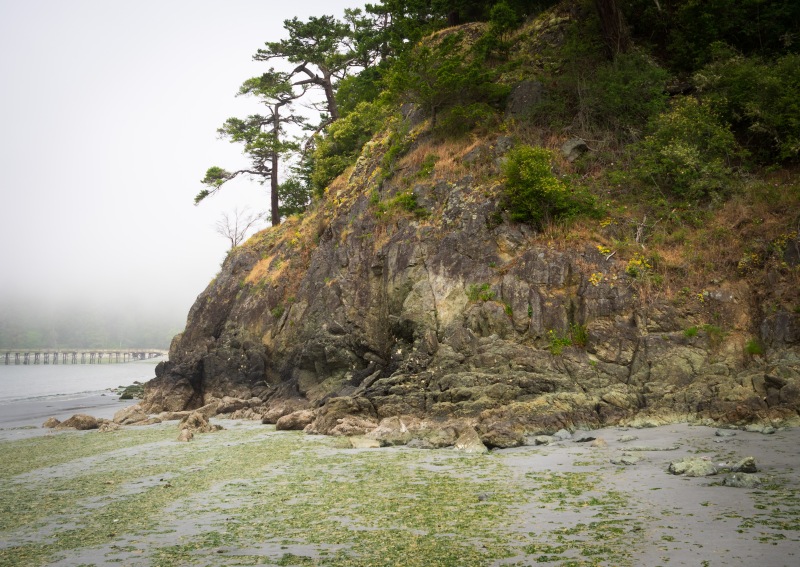 7. A receding tide deposits layers of seaweed on the beach and bares barnacle-studded rocks at the base of the cliff. 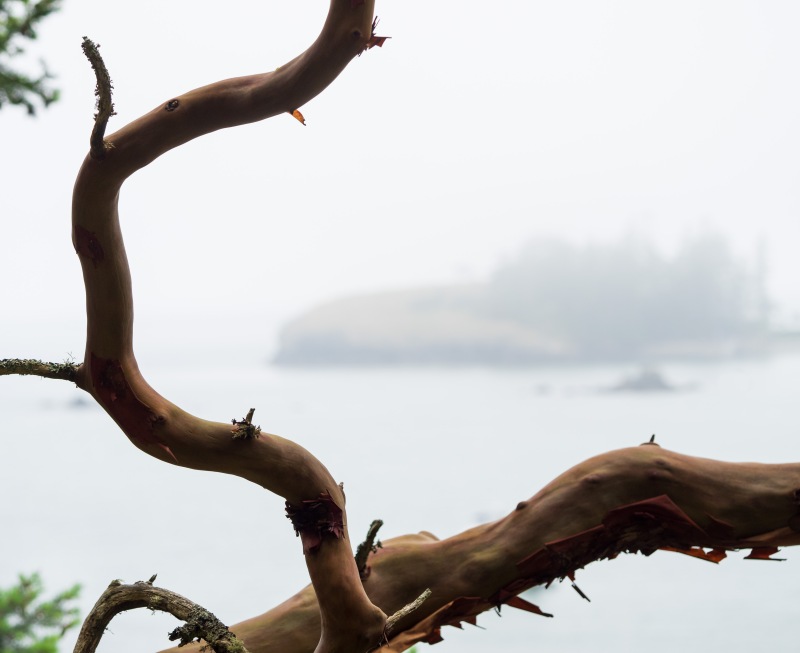 8. On top of the cliff the view through the smooth branches of a Madrone tree is fine. Even on a foggy day. Especially so. 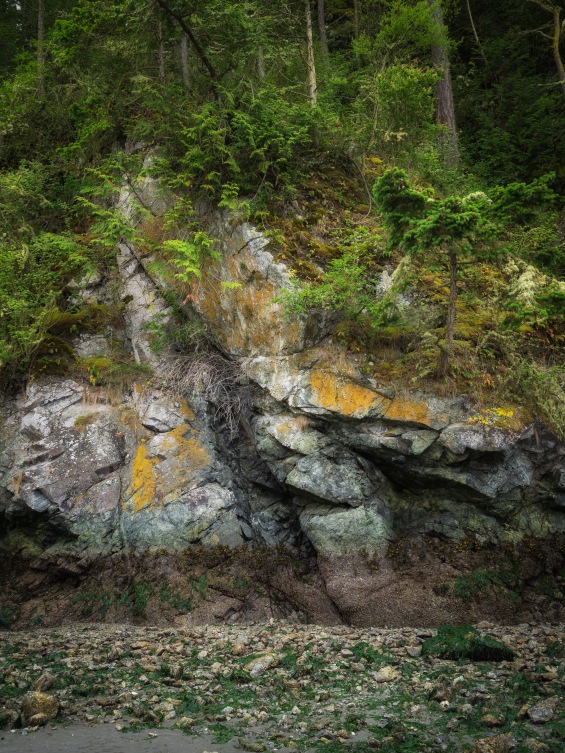 9. Splashes of ochre-colored lichens, chestnut-hued moss, wildflowers, grasses and stunted trees provide decor on a cliff to the north of Light House Point.

On the back side of the tombolo a damp wetland gives way to a sheltered cove called Lottie Bay. This bay is fed by the straight whose churning waters barrel through Deception Pass several times a day, carrying water from the Pacific, ninety miles to the west. With its muddy, shallow bottom, the little cove is a favorite spot of gulls, ducks and chattering Kingfishers. On this day Kildeer spew their high-pitched cries into the gray air, raising the alarm at the slightest perception of threat. One bird drags its wing in the classic “broken wing” feint, designed by some mysterious twist of genetic material to draw would-be predators towards the bird pretending to be injured and away from its vulnerable young.

10. Cow parsnip (Heracleum lanatum) is beginning to go to seed. The young plant stems were peeled and eaten like celery by local tribes. Black bears forage on it too, which makes me wonder if the bear that swam ashore near here three weeks earlier might have snacked on this plant. That young bear swam to several other islands before being spotted back on the mainland, near a highway. It was finally darted, captured, and hauled off to the mountains. Life should be easier there, assuming this youngster didn’t get too used to dining on birdseed and trash during his island odyssey. 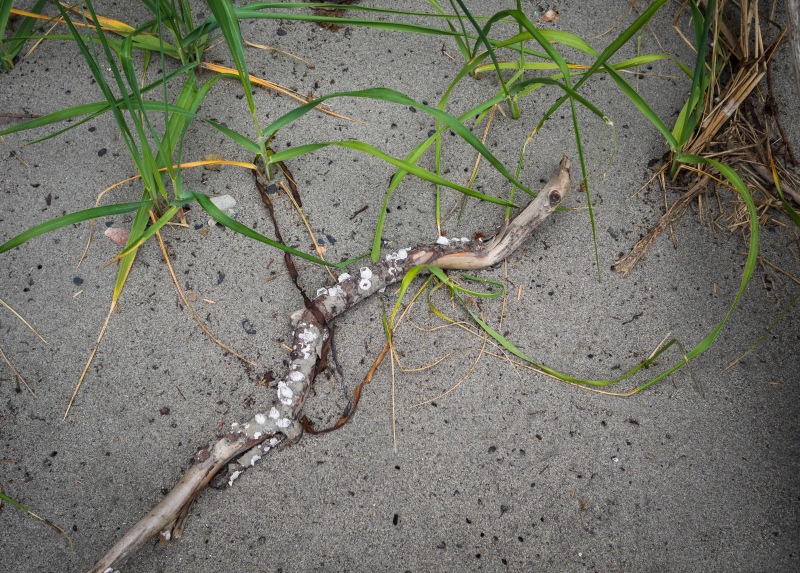 11. A washed up, barnacle-studded branch is caught in a tangle of dune grass. Another still life to admire, until it all changes again with the next tide.

I return to this magical place at different hours, in fair and foul weather, through all the seasons. Because different habitats are jammed up against one another edge to edge, there are quick, dramatic changes to experience with all my senses. The chill in the air, the scent of low tides, the zippy flight of swallows and the echoing calls of Oystercatchers – it’s always a sensory banquet.

Woods, beaches, a wetland or two, rocky cliffs, a muddy bay, off-shore islands – all in the space of a half mile or so. That’s just what I see on foot, but if I were a seal or an otter, an eagle or a squirrel, then I would have parsed this place into different components. I’d have it memorized by sense instead of names: the place of fast water, the high tree where everything can be seen, the tangle of brush to hide in… 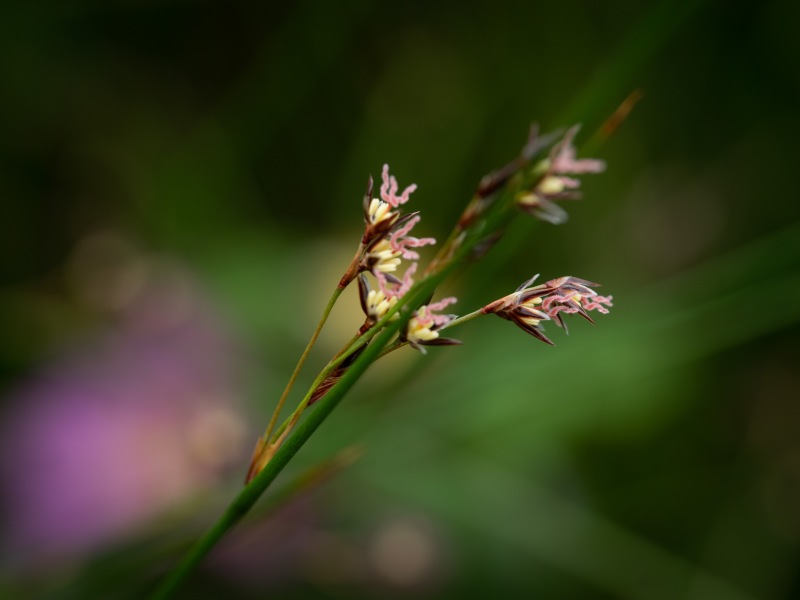 14. I believe this is Baltic rush, Juncus balticus. Rushes look like grass until you get closer.  They’re “walk right by” plants of cool, damp places that most people don’t notice. In Spring, the discerning eye can find a complex, beautiful architecture in their flowers.

15. The evergreen Sword fern (Polystichum munitum) is ubiquitous in the northwest, thriving in many different habitats. The repeating patterns are irresistible.

16. Seaweed caught on a branch shows just how high the tides can go. This may have happened last winter in a storm. It’s a rather desolate look, but I think it captures the wildness of this place.

Ten thousand flowers in spring, the moon in autumn
by Wu Men (Hui-k’ai)

Ten thousand flowers in spring, the moon in autumn,
a cool breeze in summer, snow in winter.
If your mind isn’t clouded by unnecessary things,
this is the best season of your life.

(The poem is a verse from Ordinary Mind is the Way, Case 19 in the Gateless Gate (Mumonkon), a compilation of zen koans compiled over 700 years ago in China by Chinese Zen master Wu-men Hui-hai.) 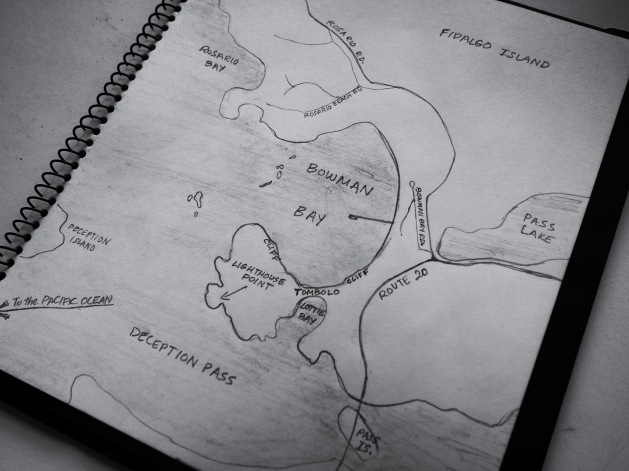 A rough map of the places mentioned in this post