Chances are, most everyone who reads this has had a special relationship with a tree, or with a type of tree. My sacred groves have changed as I moved from place to place. Oak, beech, maple – those steadfast denizens of temperate North America were boon companions for decades, along with many others. Then seven years ago, the cast of characters changed when I moved to the Pacific northwest. Tall, raggedy lines of Douglas firs took over my horizons while elegant cedars and hemlocks called me deeper into the woods. Last July I moved again and the arboreal lineup shifted. Wandering the land, I saw the familiar silhouettes of Douglas fir, Western Redcedar, and Red alder, but subtle differences began to emerge. The island ecosystems here are different than the lowlands and foothills where I lived before. Colorful, wavy-branched Madrone trees are as plentiful here as Bigleaf maples were around Seattle. I don’t see as many willows now, but the scarce Maritime juniper is an endemic specialty here that’s worth seeking out.

Getting to know the quirks of local habitats is a slow process. Knowledge and understanding build organically as I ply forest trails, stroll beaches and tiptoe across mossy balds. What better way to absorb new information than to rest my gaze on a form, gather its essence at that moment, put the camera to my eye and make a photograph. At that moment, when things go well, I apprehend the whole that I’m situated in, without separation between me and my surroundings. You could say it’s a kind of adoration. The separateness we humans so often feel can quickly drop away when we’re immersed in an activity. Being in nature with all one’s senses alert is one of the more obvious ways to let go of all that makes us feel separate. But even the seemingly passive activity of looking at images can so immersive that we forget ourselves.

Separation can drop away at any time – that is an ever-present possibility. Approaching trees without an agenda about trees – or about anything – makes room for grounded, fresh experience. It’s my wish that you might approach these photographs with a spirit of no agenda. Skip the captions if that makes it easier – they’re here because I enjoy sharing ideas and information. Whatever works, I hope you can just be with the moment.

1. Western Redcedars (Thuja plicata), their lower branches thickly coated with moss, stand tall in the mist at Rockport State Park. Redcedars are undeniably graceful, with their sloping trunks that ease into the soil, and their billowing curtains of evergreen leaves. 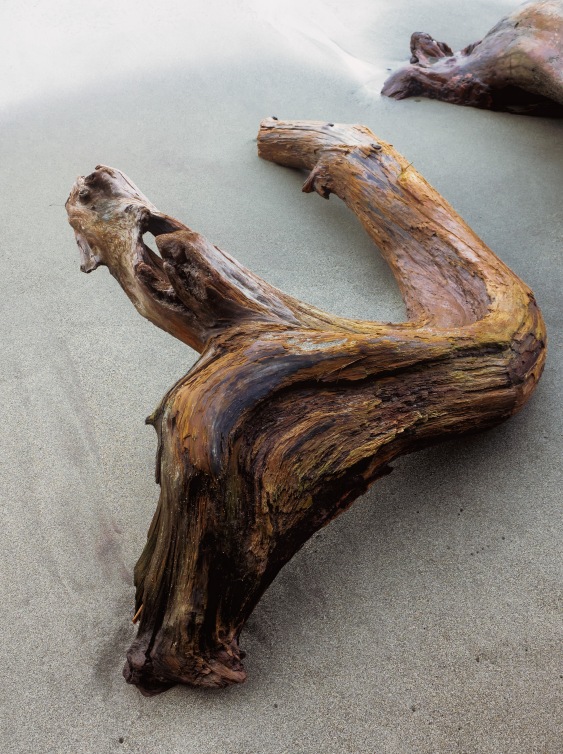 2. This solid twist of driftwood could be from a Redcedar tree. 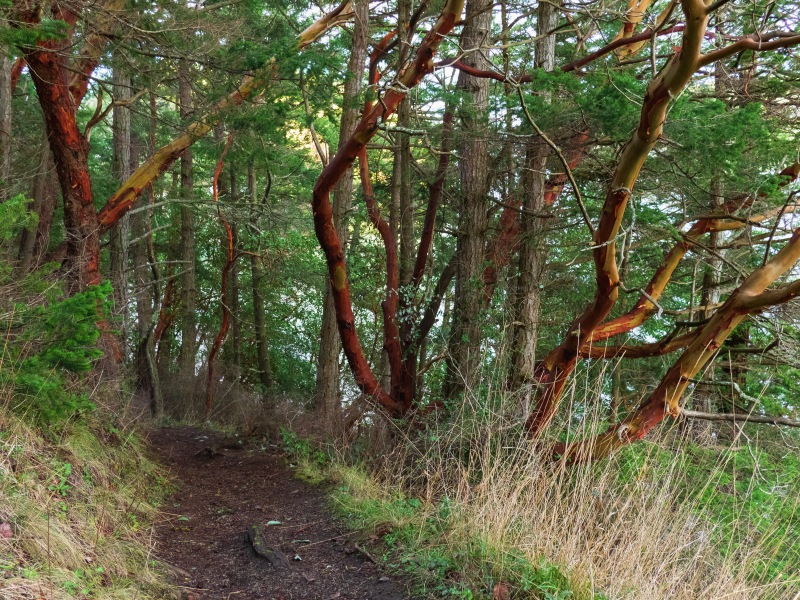 3. Curvy Pacific madrone trees (Arbutus menziesii) intertwine with upright Douglas firs along a path in Deception Pass State Park. The Madrone grows along the west coast of North America from California to British Columbia. In Puget Sound it seems to love steep slopes near water. 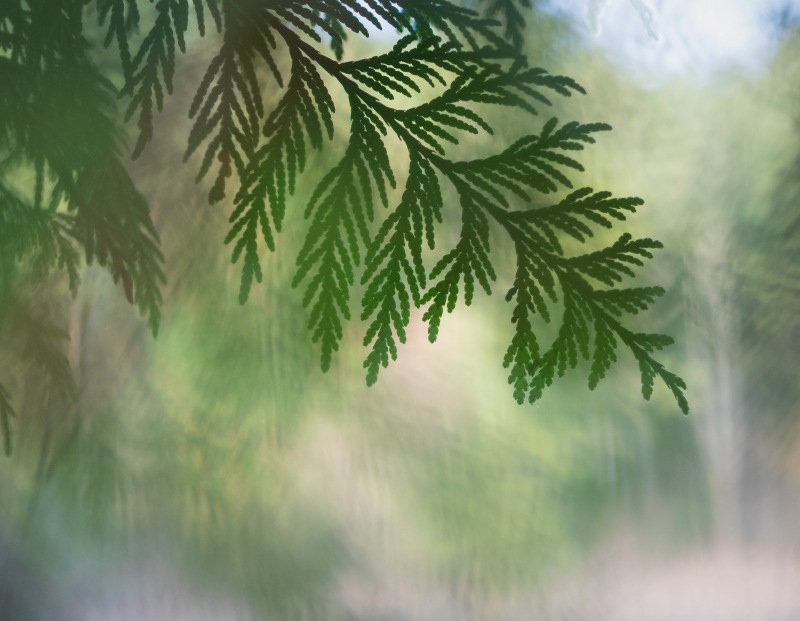 4. Feathery evergreen leaves of a Redcedar waft in the breeze. This Pacific northwest species can live over a thousand years, attaining great height and girth. And dignity. 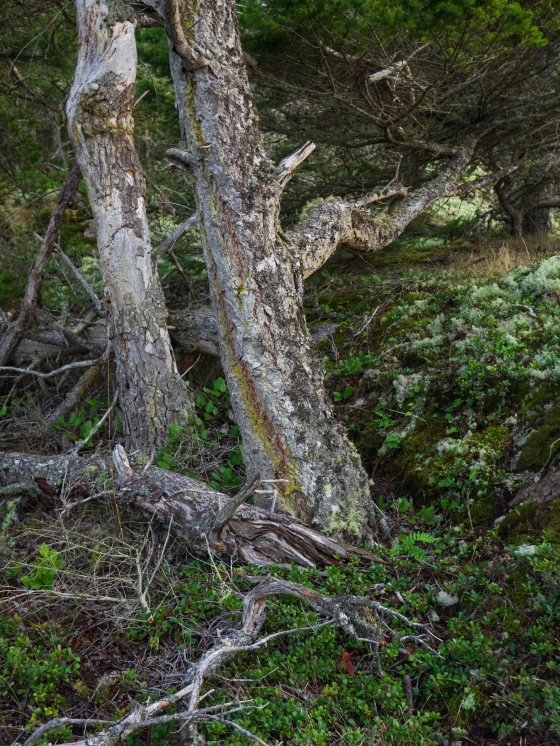 5. The green edges of our rocky islands are often set with Shore pines (Pinus contorta) along with Madrones and Douglas firs. On west-facing cliffs where the weather takes no prisoners, trees bend and eventually crumble into luxurious beds of Kinnikinnick (Arctostaphylos uva-ursi) and Reindeer lichen (Cladonia sp.). This particular grouping makes me think of a dramatic dance: arms flailing, people collapsing on the floor….  This scene may appear static, but even as they decompose, trees lead a dynamic life interacting with the flora and fauna around them. 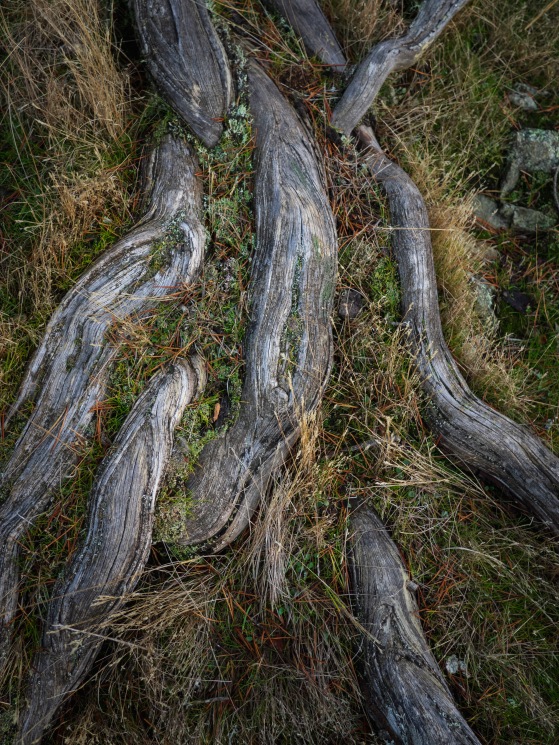 6. These roots are probably Douglas fir or Shore pine. Research shows that in the same soil as the roots of trees there are vast mycorrhizal networks that pass critical information among trees, along with nutrients, carbon and water. There is a world of intelligent activity under our feet! 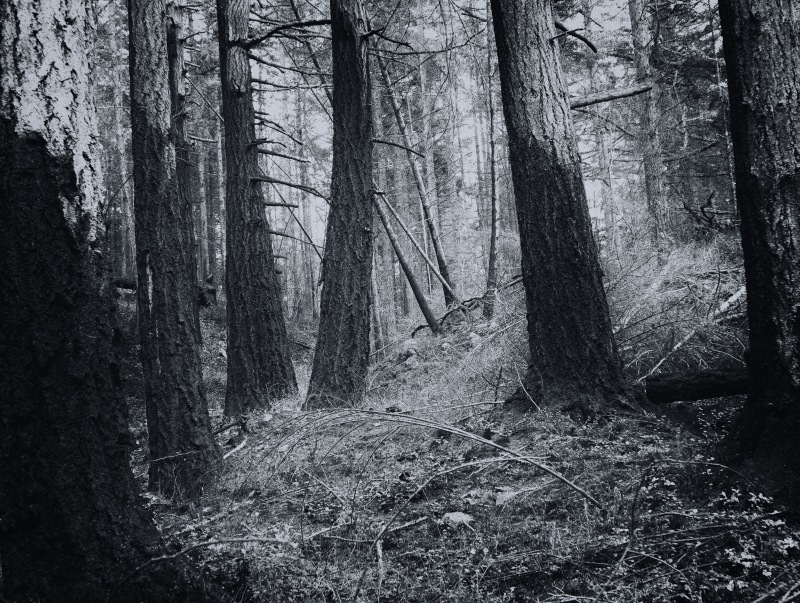 7. Fire happens. In August, 2016, it happened here, in a protected community forest.  The fire was put out, trails were closed for a time, and now the forest is healing. These Douglas firs were protected by thick bark.

8. A fallen Douglas fir has been sawed to make space for a trail. It’s sad to see the giants go, but before long new plants will take root on top of the log. A whole community of moss, ferns, mushrooms, lichens, shrubs and trees can establish itself on a prostrate tree. Not to mention spiders, beetles, squirrels, birds….

9. A mature tree that began life atop a nursery log slowly works its roots down into the ground.

10. Western hemlock boughs are nice places to lose yourself.

11. This species of juniper only grows on a handful of islands in Puget Sound and a few other nearby sites. Named the Maritime juniper (Juniperus maritima), it was differentiated from Rocky Mountain juniper (Juniperus scopulorum) in 2007, after research showed critical distinctions between the two species. The tree I photographed is next to an oft-traveled park road and is frequently photographed. Maybe all that attention buoys the tree in some mysterious way.

12. A tree that fell into a shallow lake provides support for native grasses as the wood gradually weathers into a maze of sinewy, sculptural shapes.

13. An old Shore pine lives up to its Latin name, Pinus contorta. This photo was taken in December, and all the green you see is evergreen – trees, mosses, ferns, grasses, and other plants.

14. In the forest, a neck-breaking upward gaze reveals wildly criss-crossing branches on a Douglas fir (Pseudotsuga menziesii). I imagine the benefit of all those twists and turns is that each branch finds a little more light. 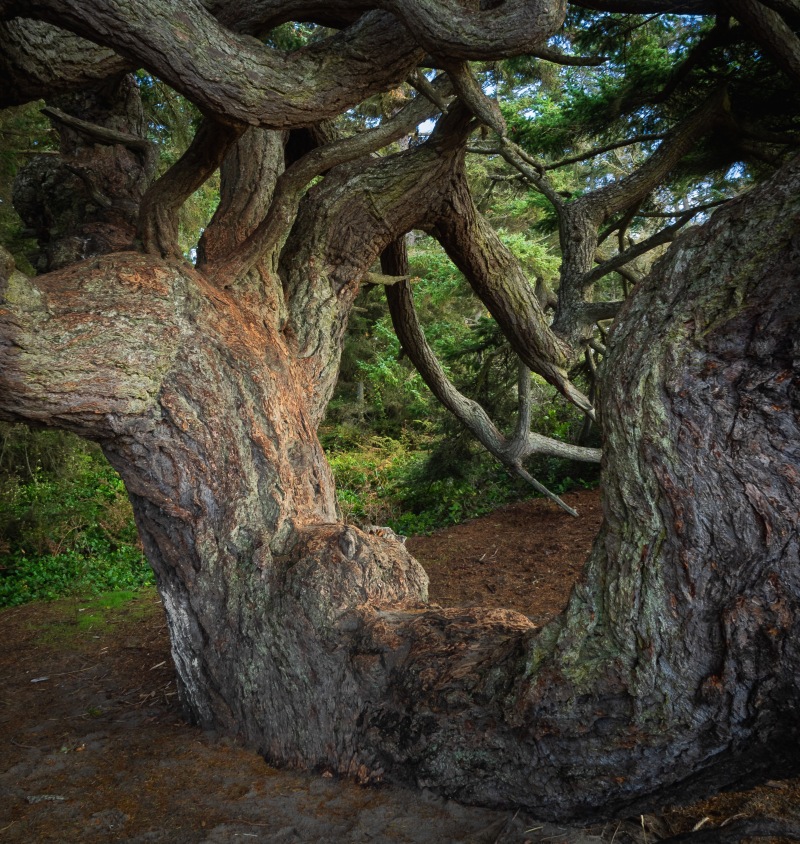 15. This Douglas fir is said to be over 800 years old. Only part of it fits into the viewfinder! Step back, and neighboring trees complicate the picture so much that it’s hard to tell which tree is which. Stand underneath, and you feel the deep power of age and maturity, and a solidity of being that emanates beneficence through every crack and fissure. 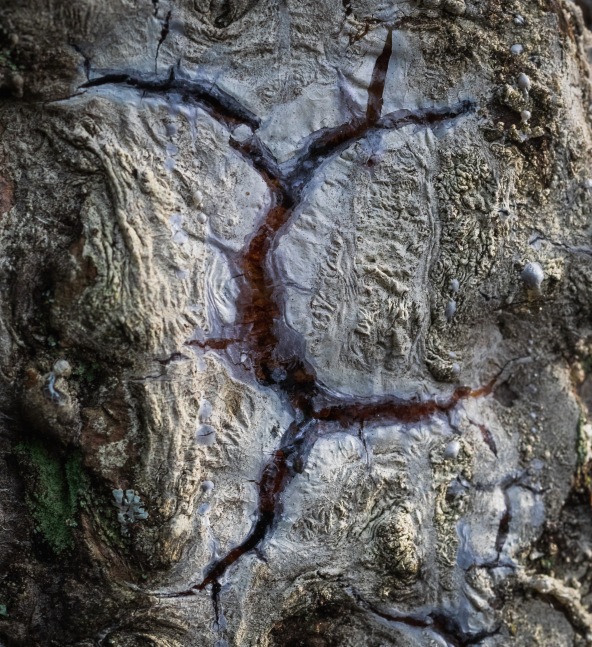 16. A close-up look at Douglas fir bark reveals congealed sap that cracked open, perhaps from temperature and humidity changes. There’s a whole world here on the skin of the tree, just as there is underneath the soil, high up in the canopy, and deep inside the heartwood.

17. The Madrone tree’s naturally peeling bark was used medicinally by indigenous peoples. Western researchers isolated Betulinic acid from the bark, an anti-inflamaotory and antimalarial substance that may also inhibit some cancers.

18. An immense Douglas fir spreads its roots like feet. The tree is probably hundreds of years old. Scattered old growth Douglas fir trees hang on in the forests here, and their noble girth does my ego good.  Being dwarfed by these great beings puts me in my places and settles my spirit.

20. Leaves of Redcedar flutter in the breeze after morning rain.

21. This tree sings of long journeys by water and the constancy of the tides. It is as wild and raw as the winter wind.

When I Am Among the Trees

When I am among the trees,
especially the willows and the honey locust,
equally the beech, the oaks and the pines,
they give off such hints of gladness.
I would almost say that they save me, and daily.

I am so distant from the hope of myself,
in which I have goodness, and discernment,
and never hurry through the world
but walk slowly, and bow often.

Around me the trees stir in their leaves
and call out, “Stay awhile.”
The light flows from their branches.

And they call again, “It’s simple,” they say,
“and you too have come
into the world to do this, to go easy, to be filled
with light, and to shine.”