by circumstance, wriggling into

Just short of four months ago, my partner and I traveled deep into the Sonoran desert, near Arizona’s border with Mexico.  We had come to explore Organ Pipe National Monument, part of a vast desert landscape ranging through parts of California and Arizona, and Mexico.

Slicing across this desert is an international border – a political boundary, not an ecological one. The border is crossed fairly easily by plants and animals, at least while there is no wall. But people – they fight over this line in the sand. Some of them suffer deeply because of the border; many have lost their lives because of it.

The evidence of this struggle is quite apparent in the desert and the small towns, and between border conflicts and a difficult desert environment, it’s clear that adaptation is what every living being must do.

How people adapt or fail to adapt to the political and economical situation here is a complicated story that I don’t feel equipped to tell, except to say that the signs I saw – the border fence and checkpoints, the helicopter that buzzed us when we went off trail, the empty water jugs, the graves and roadside memorials – those signs of struggle were impossible to get away from. In retrospect, it’s almost as if those signs were a portent of the life-threatening change that would throw us completely off balance within hours of returning to civilization, a change that forced us to adapt beyond what we would have imagined.

But as we walked and drove through the desert we were purely in the moment. I was focused on taking photographs. Needless to say, I took a lot.*   Looking through them now, an obvious category is the flora the brilliantly adapted, tough and prickly plants of the desert that tell their own stories of adaptation.  Another group of photographs will wait for another post. Those pictures touch on the stark realities of the border and this desolate, unforgiving country. For now, the plants:

The familiar looking Englemann’s Prickly Pear cactus (familiar because similar cacti grow in many parts of the US) is found scattered throughout the park. I love the soft green color of this cactus, but in black and white, attention is drawn to the contrast between the round shape and spiky spines, which I find compelling.

The large, multiple-stem cactus that gives the park its name is the Organ Pipe cactus. It’s more common in Mexico but inches onto the southern edge of the U. S. here in the hot Sonoran desert. This cactus and others that are rare in the U.S. are the primary reason the park land was set aside, way back in 1937.

I’m not big on interpretive signs, preferring to keep fresh eyes and form my own take on things. Once in a while I do read them though, and a sign along the winding, scenic road through the park informs visitors that wind blowing through an Organ Pipe cactus makes a strange and beautiful sound. It was a breezy day so we tried it. Choosing a huge old specimen, we gingerly stuck our heads into the mass of spine-cloaked stems. The sound was enchanting and otherworldly – a kind of breathy, ethereal hum that is perfectly suited to the spare, quiet landscape.

Another cactus seen more often in Mexico than America is the Senita cactus, below. It has a similar growth habit to the Organ Pipe, but the details are different. Older specimens in the second photograph show the Senita’s distinctive hairy looking tops. I was fascinated to learn that a moth has co-evolved with this cactus; both species have adapted to the environment and each other in a complex evolutionary dance. The moth larvae live on Senita cacti and eat the fruits; later, the moth pollinates the Senita’s night-blooming flowers. This cactus can grow tall, to 13 feet. 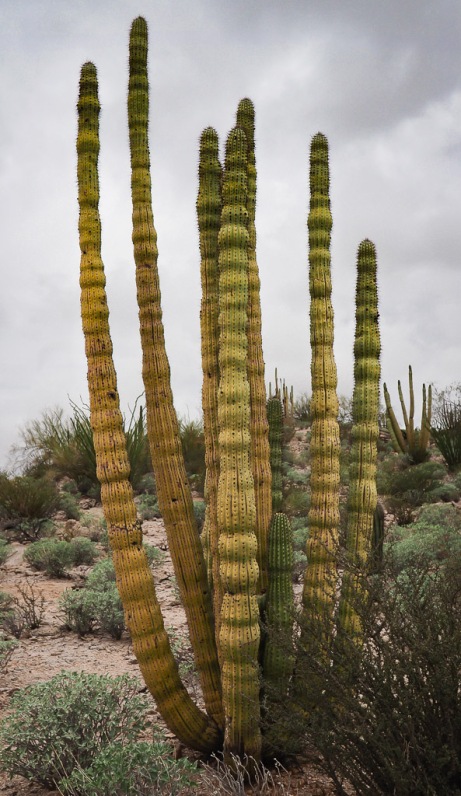 Twenty-six species of cactus live at Organ Pipe; all are adapted to life at temperatures ranging from over 100 F to below freezing. Rainfall here is scant and unpredictable. Plants must be able to take full advantage of rainwater when it comes; storing it has proved one of the best adaptations to this environment.

Below is a typical jumble of the peculiar forms of Saguaro, Ocotillo, Senita, Cholla, Brittlebush, Palo Verde tree, and others. They all vie for space in the arid environment, making Organ Pipe National Monument essentially a lush, desert garden. 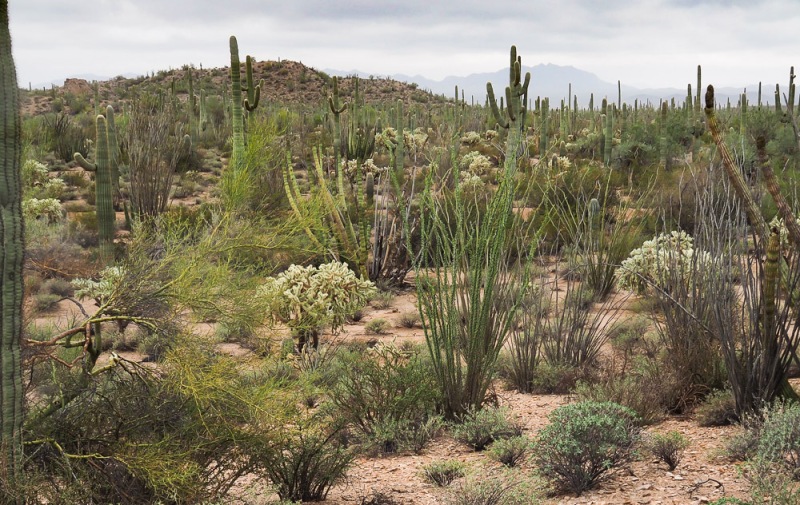 Perhaps the most common cactus is the Saguaro, seen here in the foreground and scattering up the hillside to the left.

Below is an example of the rare cristate mutation on a Saguaro. The cause might be frost, but no one is sure why the cactus sometimes grows in this ornate pattern. In fact, over a hundred other plants sometimes exhibit this abnormal growth pattern too, called fasciation.

Cacti can be seen at Organ Pipe in all stages of growth and decay. Both Organ Pipe and Saguaro cacti often begin life hidden under a desert tree such as the Palo Verde. The small tree or shrub provides just enough shelter for the cactus to get a good grip on life. Once we started looking for them, we saw many young cacti under trees and shrubs, like the Organ Pipe cactus growing out of the middle of a Palo Verde, below. You can see a shorter stem in front of the main stem. 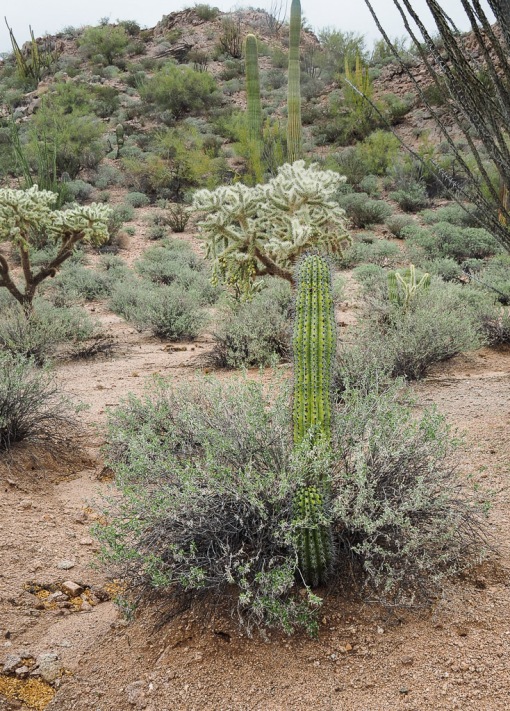 Below is the skeleton and peeling “skin” of a fallen giant – in this case, an Occotillo.

The fallen Saguaro below pulled the desert floor with it when it toppled, exposing the rough rock it grew in.  Below, you can see the “skin” of a dead Saguaro and the woody structure underneath.

This oddly beckoning skeleton is probably a Jumping Cholla cactus. Further down, you’ll see a live one.

Like the native Tohono O’odham people, who have lived here for many generations, cacti have adapted well to desert extremes.  Shallow root systems and flexible “skins” allow cacti to quickly gulp down rain that falls as unpredictably as a cat’s meanderings.  Pale colors reflect away over-abundant light. Spines provide protection from thirsty animals, guide raindrops towards the cactus flesh, and create slender threads of shade on sweltering days. Many cacti can put their metabolism into idle mode to wait out the calendar’s rough spots.

Below, a roadside scene at Organ Pipe where Cholla cacti and Saguaros are set against the Ajo Range. On the other side of the mountains is the 4,340 square mile Tohono O’odham (‘Desert People’) reservation, the second largest in the country.

Where there’s water, plant life adapts and changes gears.  At Quitobaquito Springs near the border, trees and a wild tangle of grasses edge a pond. 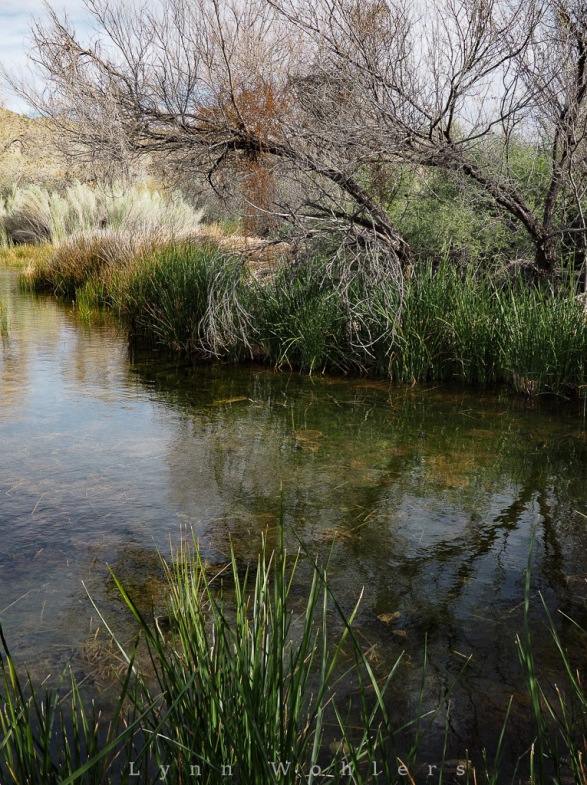 This harsh land has a strange beauty. The image below is an Ocotillo plant with the Ajo Mountains in the background. The Ocotillo’s peculiar spindly form is an odd favorite of mine. I was introduced to the plant at Joshua Tree National Park in California. It was good to see the Ocotillo’s eccentric scribbles punctuate the landscape again in southern Arizona.

Some Ocotillos sport striped branches that contrast with new leaves, others don’t. Another adaptation? Maybe. The small, tough leaves can appear a few days after a good rain and fall off in dry spells, the plant going dormant for years if necessary.

This is Jumping cholla, or Chain fruit cholla (Cylindropuntia fulgida). This specimen, with its balanced, formal symmetry, reminds me of Victorian decoration. 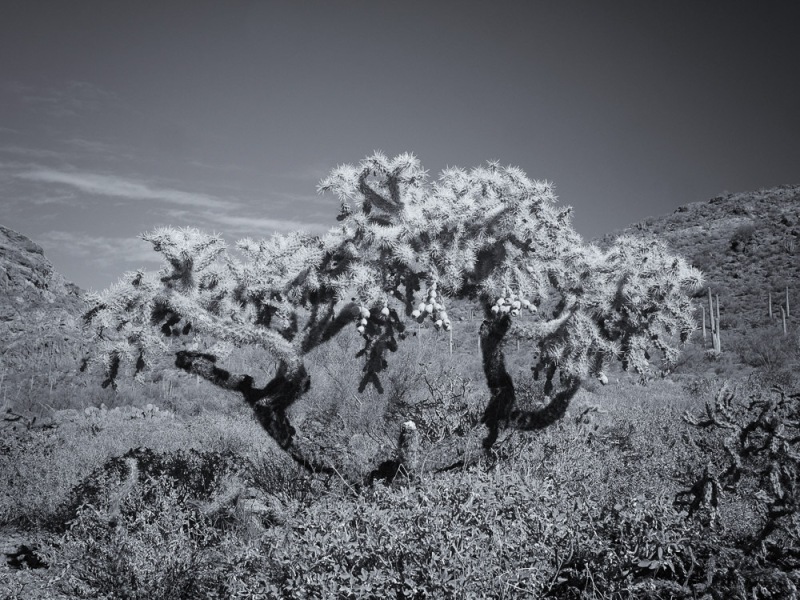 Below is another Cholla cactus, the Teddy Bear Cholla (Cylindropuntia bigloveii). Its tiny, backward hooked spines are like little velcro magnets – get anywhere near them and watch out! They will detach and seem to jump right onto you. Good luck removing them! At Joshua Tree in California I saw a discarded T shirt in a Cholla patch – picking out the spines just wasn’t worth the effort (it would have been nice if they’d packed it out).  This cactus is also known for the way its spines catch the light with a warm glow at dusk. 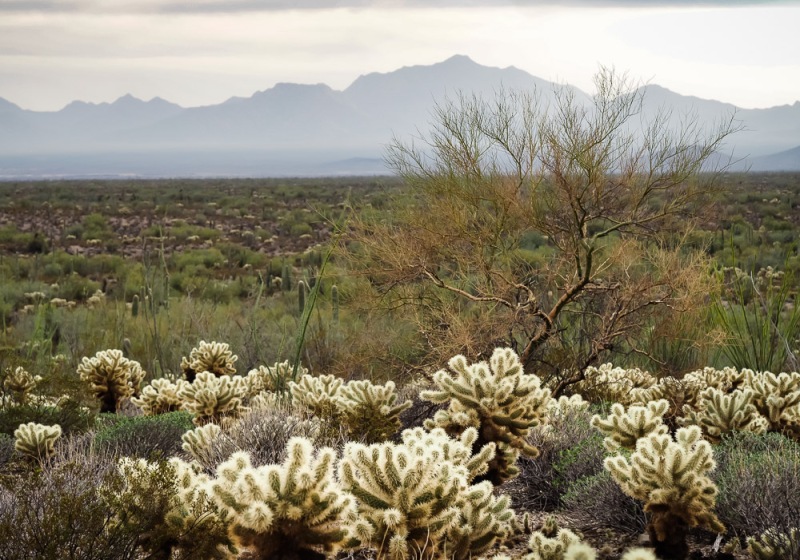 We were too early to see cactus flowers, except for a few. Below, the bud of a cactus, possibly a species of Mammillaria. Many species of Mammillaria cactus grow in Mexico but only a few thrive in the US, at least in the wild. They are popular as cultivated cacti. Below the flower, a barrel cactus with last year’s fruit, well protected behind a thick ring of sharp spines. 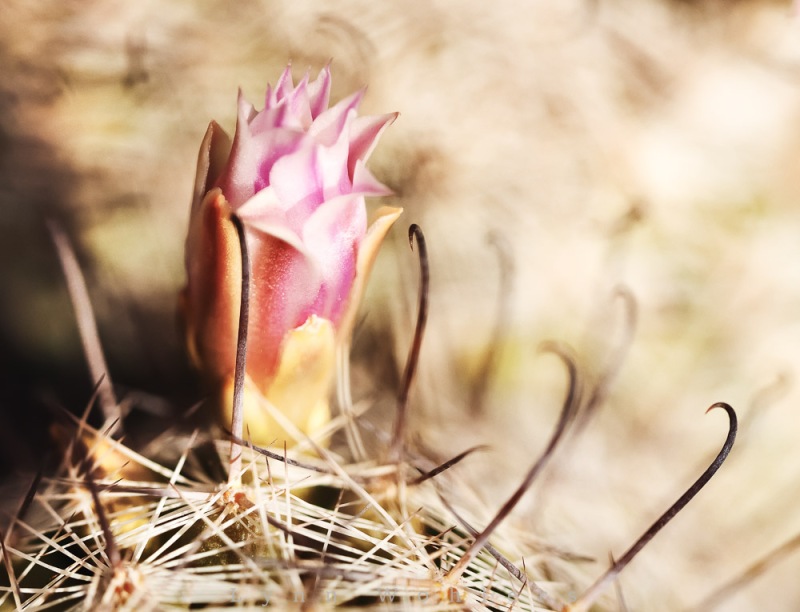 Below, a rare Elephant tree (Bursera microphylla) wedges its water-swollen trunk and  branches into the poor soil of a rocky hillside. I would have inhaled deeply if I’d known the tree has a wonderfully pungent fragrance, which I learned later online (no interpretive sign for that!). With all the moisture it can store, the Elephant tree can go a year without rain, but it is very susceptible to cold, which is why it’s more common across the border in Mexico. The tree’s tiny leaves arrayed on delicate branches contrast with the tough-barked, swollen trunk. The leaves’ pores open at night, another way to conserve water.

Some indigenous people who used the reddish sap as medicine cautioned that it must be kept out of sight. There seem to be layers of mystery around this species – I was drawn to the tree and I wanted to sit under it for an hour, just feeling its essence. Unfortunately, I don’t usually have that luxury when traveling. I’ll try to remember these lessons for my next trip: 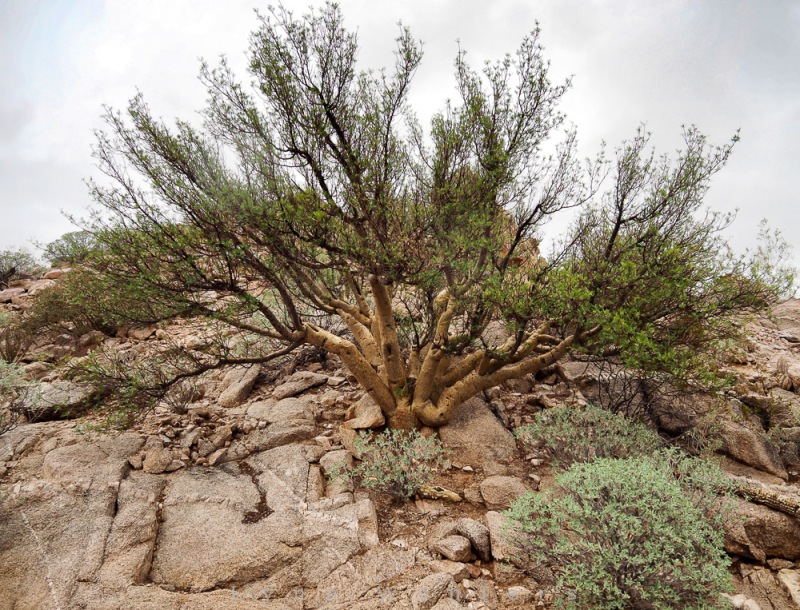 Another intriguing desert adaptation is the relationship between the Phainopepla, a medium sized bird, and the Desert mistletoe (Phoradendron californicum). When the bird eats mistletoe berries while perched on the branch of a host tree, the seeds are left behind, typically in a perfect spot for future germination.  This mistletoe is a hemiparasite that grows on desert trees and shrubs. Below you can see the berries growing close up, and Desert mistletoe in a Palo Verde tree. 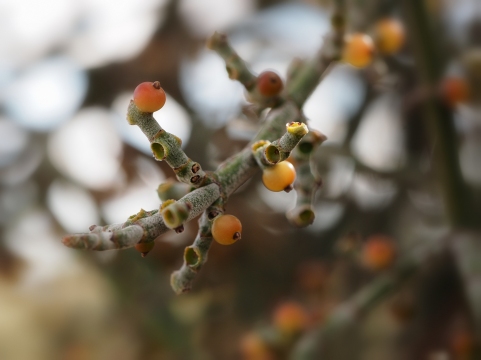 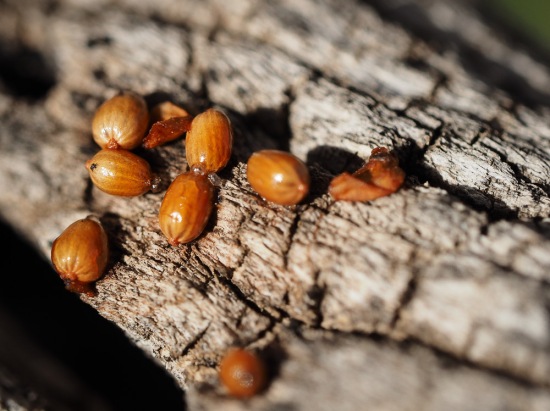 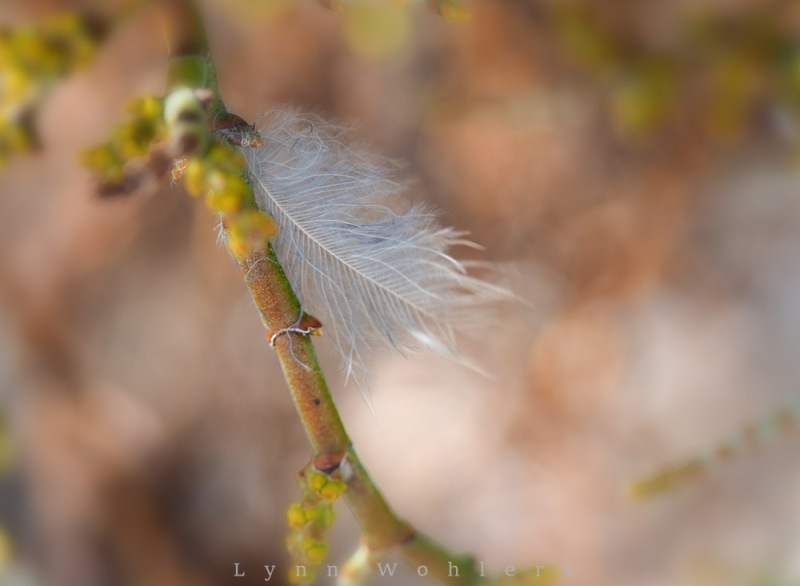 Our own adaptations to changing circumstances – physical, emotional, intellectual – may be less obvious at first glance than those of the plants at Organ Pipe, but they are just as interesting. Let’s hope we as a species can be as successful in evolving with rather than against our surroundings.

* Taking travel photographs is challenging.  Every time I travel to a new place, excitement takes over. When I get home I realize all the things I forgot to do: I should have used a different aperture, I shouldn’t have left the polarizing filter on, I should have composed more carefully, held the camera steady, checked the exposure, etc. Maybe I should tape a small sign on my camera the next time I travel that says, “Stop. Think.”  The most successful photos above are thanks to practiced eyes and the miracles of digital cameras and software, in spite of an over-excited mind. The less successful ones are lessons.