Last week I was back in New York, the city I fell in love with at the age of five, moved to at age seventeen, then left and returned to several times before moving west in 2012.

When I was in my early twenties I kept a bike in my apartment. I would ride around lower Manhattan on the weekends before my shift at an uptown restaurant, where I waited tables. For a few summers wildflowers grew in profusion on the empty lots that were the future site of the World Trade Center, then just in the planning stages. I could pick flowers for free and bring them back to my apartment. I was always trying to meld city and country. Sometimes I got up onto the High Line, too. The High Line was an old elevated railway on the West side that had been abandoned years before. Wildflowers grew there, and small trees sprouted up through the rubble, totally untended and mostly unseen. It was magic. 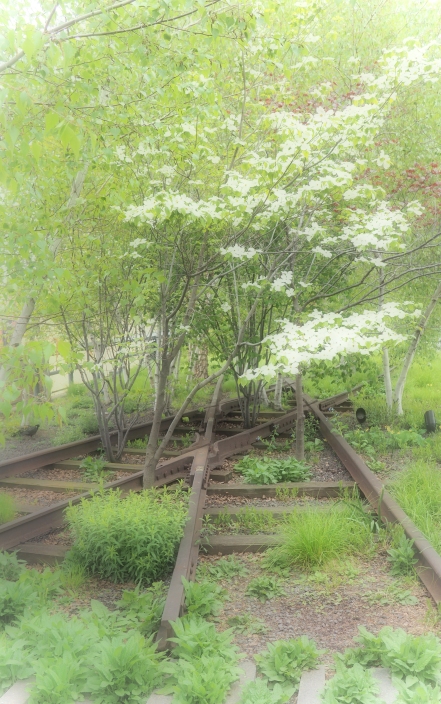 This photo was taken just last week but it evokes the feeling of the old High Line, minus the broken glass and trash. The elevated rail line was used to haul in basic foods like cream, butter and meat back in the 1940’s and 50’s. For a time, it was safer than running trains down on the busy streets. When the trucking industry expanded, the rail line fell into disuse. Instead of tearing down what many people considered an eyesore, the city did the right thing and turned it into a park. It opened in 2009 and became an instant hit with New Yorkers and tourists.

Above, the park seen from the Whitney Museum. Last year the Whitney moved into a new building designed by Renzo Piano. The building’s hulking, muscular form visually anchors the south end of the High Line. Piano’s design allows visitors to descend from floor to floor outside the building, offering expansive views of the Hudson River waterfront, Manhattan’s West Side, and the High Line. There are nice people-watching opportunities too, if you’re in a sociable mood. I was happy for the crowds that day. I enjoyed the huge portrait show at the Whitney – Seattle doesn’t come close to what New York offers in terms of art. I also liked a Whitney show of work by June Leaf, an older artist who’s not very well known. A gallery nearby had a concurrent show of her sculpture and drawing so we headed over. We passed shows of Sigmar Polke’s painting at David Zwirner Gallery and Richard Serra’s sculpture at Gagosian. We took long drinks at the deep well that is art in New York City. It was a day of serendipity, as one thing led to the next. 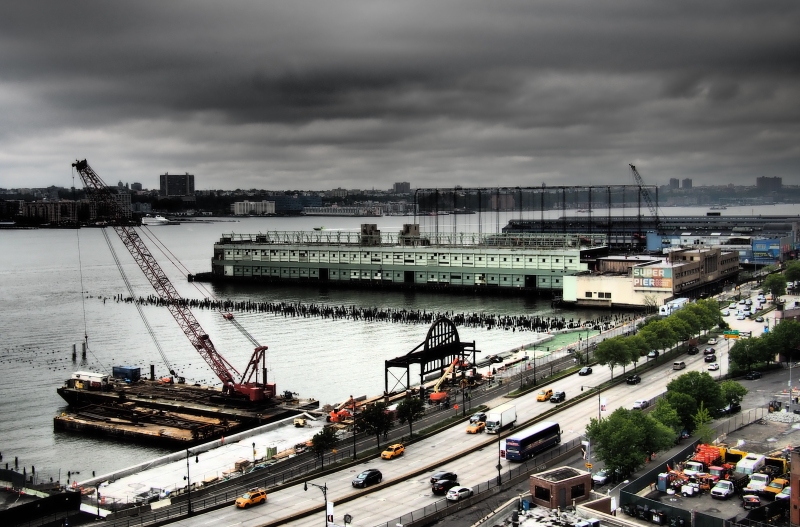 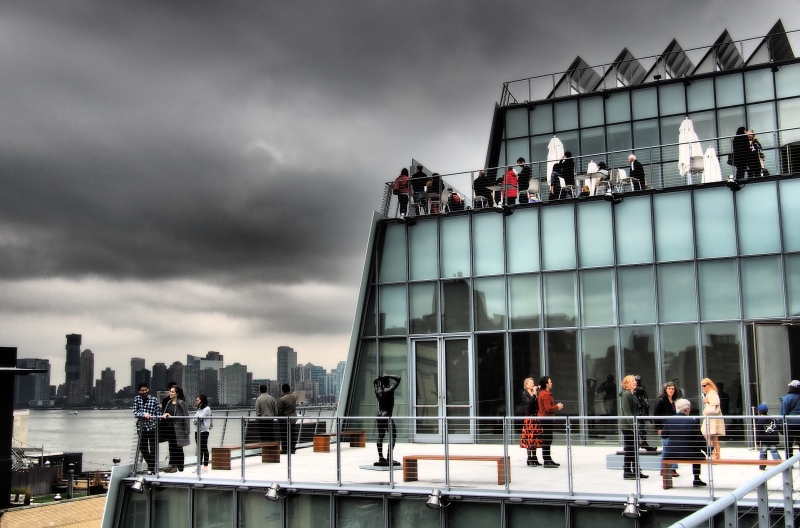 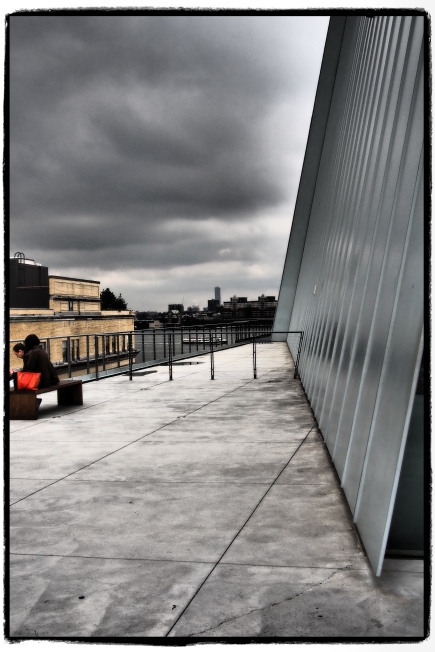 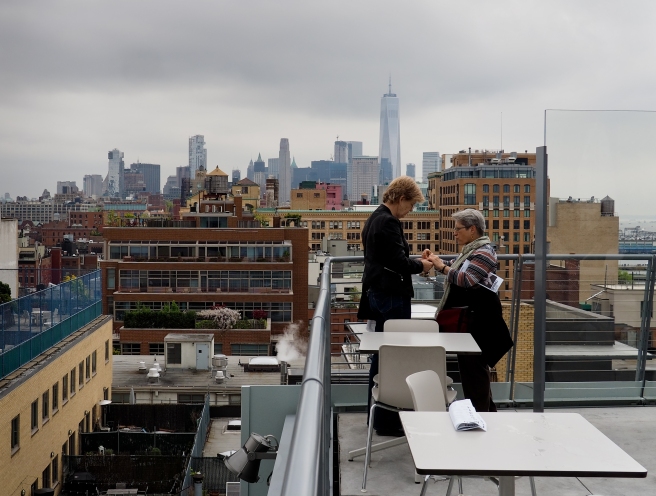 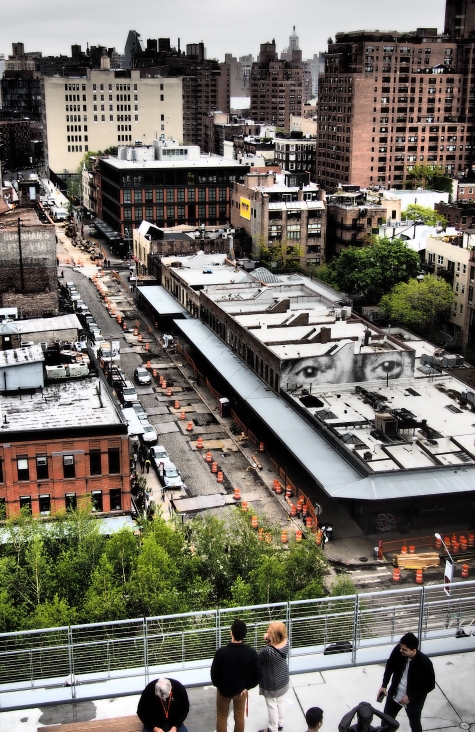 Back on the street next to Whitney, looking up towards the High Line. As you walk north or south through the park, essentially a narrow strip of real estate set with tasteful benches and beautifully landscaped with (mostly) native flowers and trees, you can pass under buildings, peer into windows and gaze down onto streets that cross underneath. You’re just above the fray. It’s enough to gain a different perspective, but not so far above that it isn’t still real, and close. 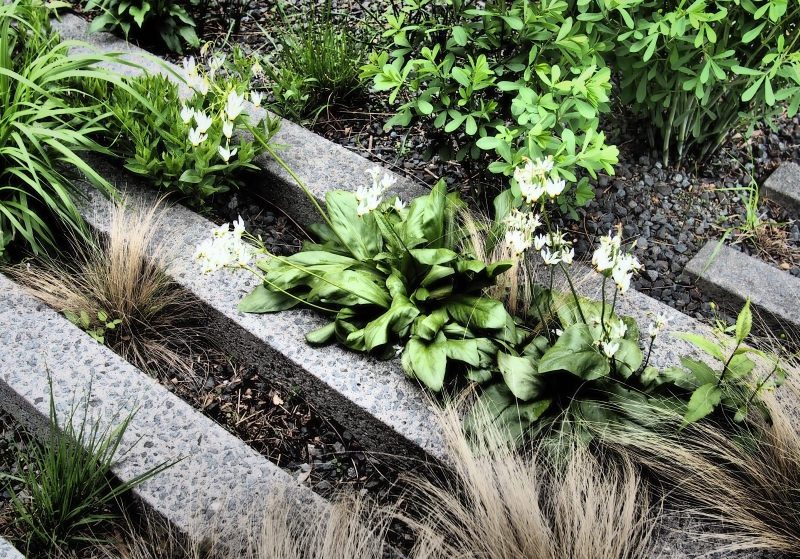 If you’re interested, that’s Baptisia in the right corner and Shooting Stars (Dodecatheon) sprouting up through concrete strips that echo the railroad tracks. The pink and blue flowers above are Salvia pratensis (Meadow sage). The metal hoops between the rails are a sculpture called “Steel Rings” that references the Trans-Arabian pipeline, by Rayyane Tabet. 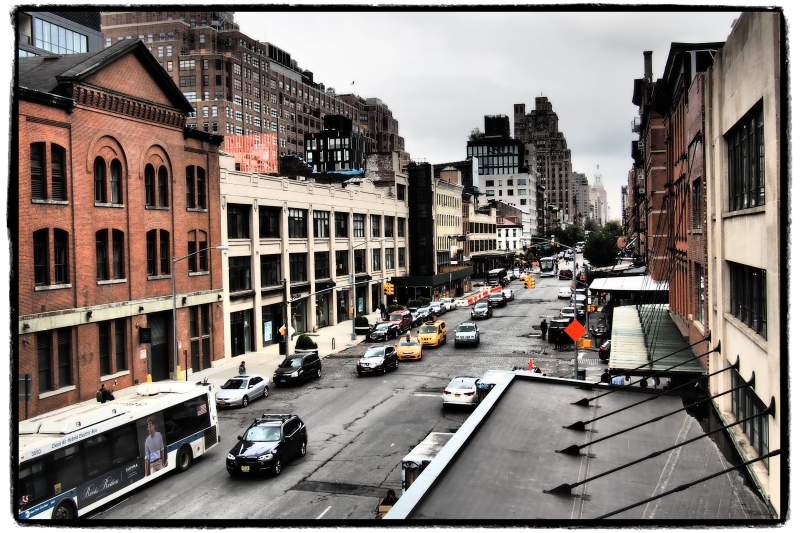 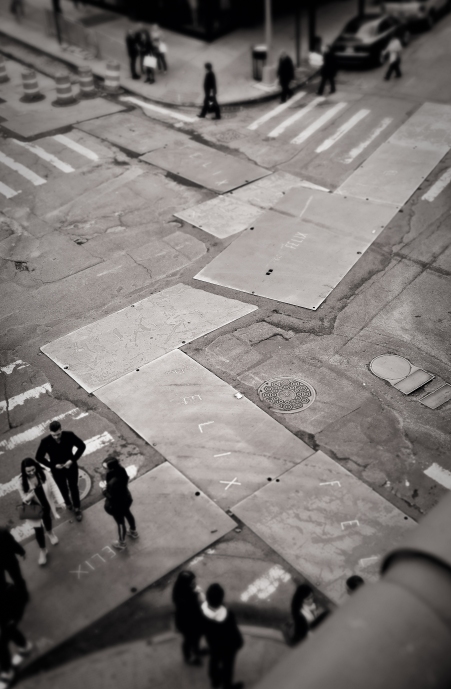 Someone has written “FELIX” on these construction plates. Why, I don’t know. It’s just another manifestation of identity in a city that always strives upwards.

Frank Gehry’s IAC Building, his first in New York, and one of my favorite sites along the High Line. I love viewing it through these honeysuckle vines winding up a fence, but I understand that may not appeal to everyone. 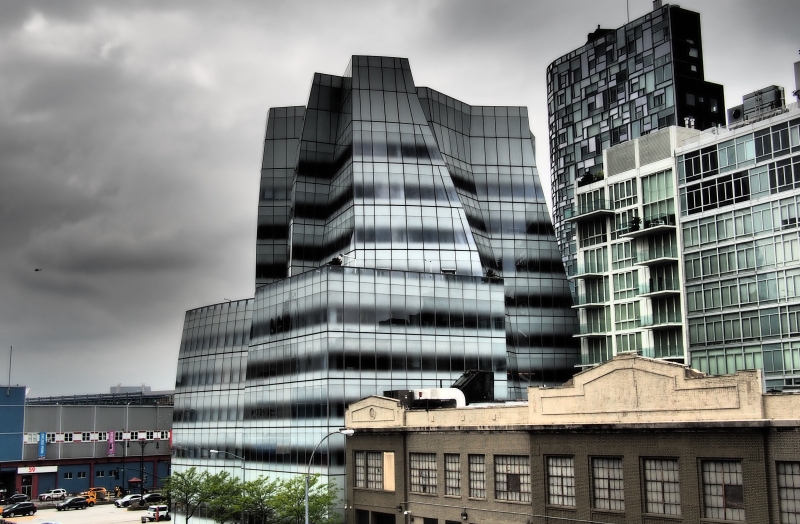 DID YOU KNOW that the elevated railroad was built because trains on tracks running down Tenth Avenue caused the deaths of many pedestrians? DID YOU KNOW that “West Side Cowboys” ran ahead of the trains on their horses, carrying red flags to warn passers by of the oncoming train? Eventually the city decided enough was enough and built the elevated line. It fell out of favor when trucking got big. It was considered an eyesore for years, but now lives anew, as one of New York’s big attractions.

The links are excellent – worth a few minutes!

Lynn Purse, of the blog Composerinthegarden, sent a great video link about the making of the High Line:

I made liberal use of some of the so-called art filters on my Olympus camera the day we went to the Whitney and High Line. It was overcast and dull out. The filters added a little punch. I go back and forth about using them, sometimes believing I should stick with images straight from the camera without in-camera modifications that I might later regret (but it’s always good to question one’s “shoulds”).

Two days earlier, I met up with another blogger, Patti Kuche. We sat down in the Rubin Museum and talked a blue streak about photography and blogging. Patti picked up my camera and casually took a few photos from where we sat, using the filters – she knew about them because she had once considered getting the camera.  I liked what she did, and that was all I needed to go back to trying them again. Coming soon: Patti’s photos and thoughts about bloggers’ meetings.