Willow, weep for me

A season of quiet dread, as holidays and more darkness approach.

But adapt, and maybe – surely

(Adapting might mean hiding out in a coffee shop, sipping espresso, perusing the paper).

Browsing on Flickr over the weekend, I saw scans mixed in with photos on a member’s page. It reminded me that scanning is a great way to experiment with making images.  Back in the 80’s I worked at a copy shop near Columbia University for a year.  It was a busy store, but once in a while there was down time. Spending all day copying print, from flyers to graduate theses, I was drawn to experiment with the big Kodak machines. (Those copiers were temperamental and our repairman would fly in on a cocaine high and whip them into shape in no time, but that’s another story). Like many people, I first tried putting my hand on the glass, marveling at the detail. Quickly I moved on to other objects, including colorful patterned socks from the 50’s, and tiny shells that appeared as a galaxy of stars when I raised the lid up, making the background black.

Here are a few quick home grown experiments. My scanner/copier isn’t nearly as good as those old Kodaks. It doesn’t focus as well. But with processing in Lightroom and On1, I can add textures, change colors, drop borders in, and play to my heart’s content. And I never have to worry that the store owner will show up while I’m in the midst of it. 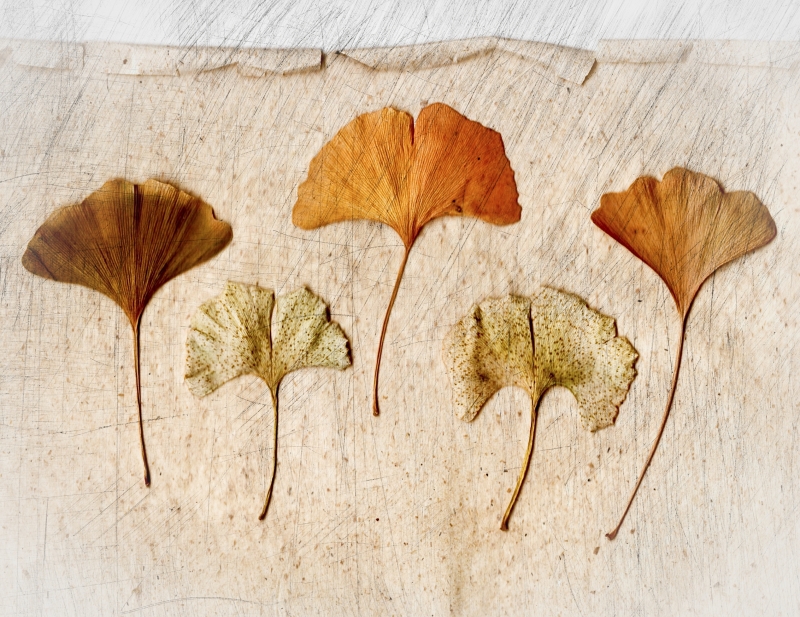 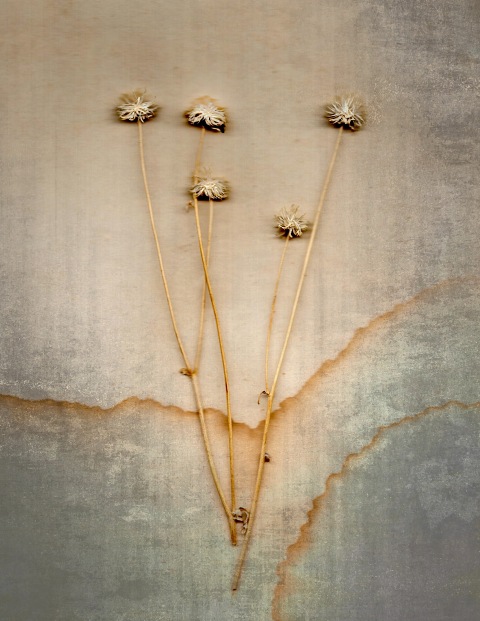 Many of you will recognize the ginkgo leaves. I pick them up now and then. They evoke my earliest days in New York, where many a city block is planted with the sturdy, pollution-resistant trees, and associations with Buddhism, because the species has been grown in Chinese temple gardens for almost a thousand years.  Long-lived as individual trees (scroll down to one that’s 2000 years old), ginkgoes may be the oldest living seed plants. They shared space with dinosaurs millions of years ago. The attractive leaf shape with its many variations on the fan theme, and the strong yellow fall color are appealing. I love this tree!

(One more fact about Ginkgoes – when I first learned about them, I read that they did not exist in the wild, and hadn’t been known to grow wild in historical times. But three years ago wild Ginkgo forests were “discovered” in southwestern China!  Scientists were able to determine, with DNA testing and other methods, that the trees weren’t put there by humans. Indigenous peoples’ taboos against planting or logging them apparently helped preserve a wild pocket or two of the trees.

The net-veined leaves are from a Magnolia tree at Washington Park Arboretum in Seattle. Insects eat the fleshier parts, skeletonizing the leaves. And who knew – you can buy them on the internet, and learn how to make your own.

The flower and leaf collections are from trips to Arizona. Old, water-stained paper that I saved is in the background.  I made the marbled paper in the last scan by floating and swirling oil paints on water in a roasting pan. I hope I threw that pan out…

Flowing slow and shallow in summer but regularly obliterating its borders in other seasons, the Snoqualmie River loops a curly path through rich farmland east of Seattle, not far from where I live.  Two weeks ago abundant rain caused its banks to overflow again and closed roads in the valley.  I went out to see what might be interesting to photograph that first weekend of November. It was the season of last leaves clinging to branches for one more day, fallen apples rotting in the grass, and damp, chill winds.

At a bend in the road where I could stand near the ever-expanding river’s edge, I saw a beautiful, tangled scene of leafy chaos.

(What beauty was there in the chaos of that theater in Paris yesterday? None.) 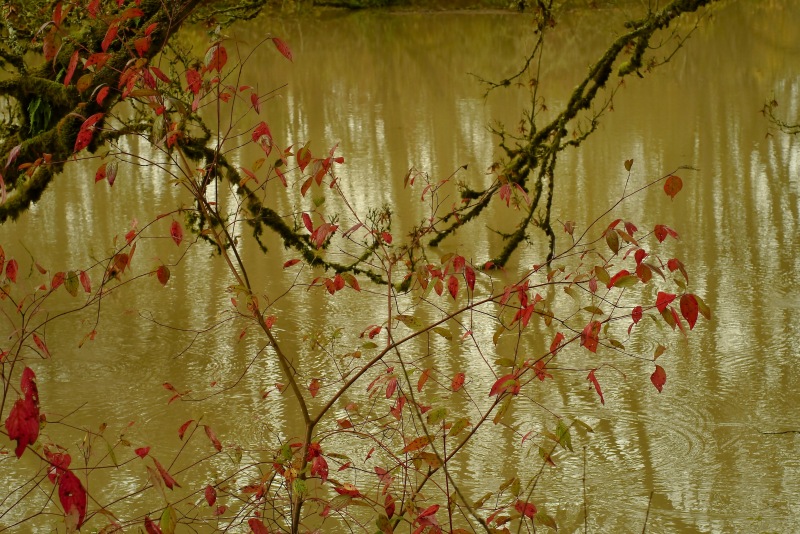 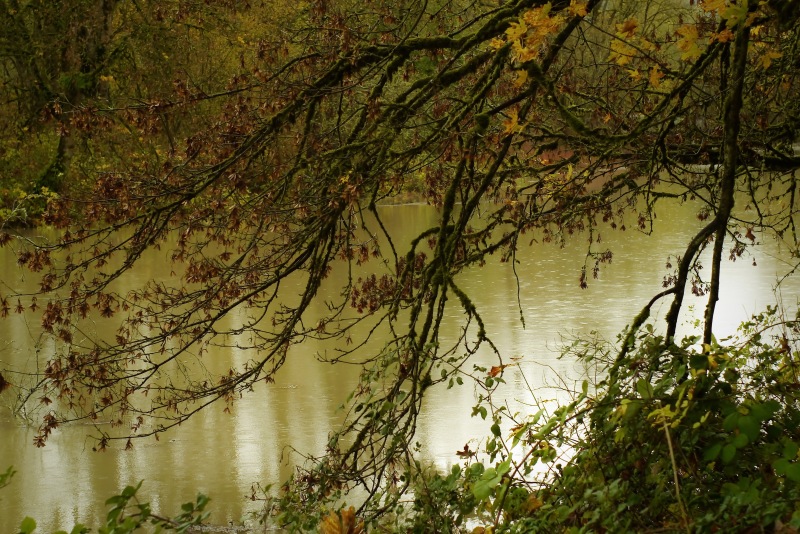 I tried to make an image that would convey the scene, but the scope was so much bigger than what I could get on a webpage.

(And how overwhelming does the flood of terrorism feel to Parisians today?) 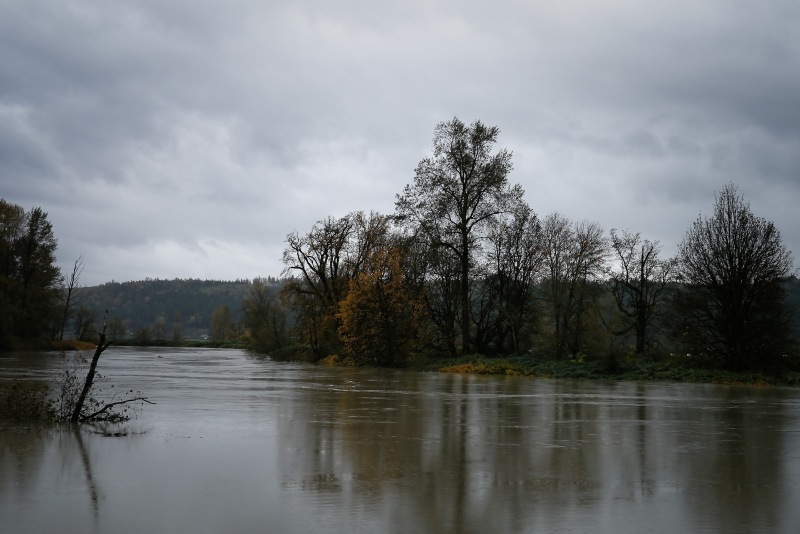 The year has been dry here, sparse snowfall in the mountains last winter reducing some waterways down to trickles over the summer. So the heavy rain two weeks ago wasn’t a bad thing. As I type, another storm system floods the river again, but the valley will absorb this storm, as it has taken on countless storms for longer than we’ve known.

(And how many more storms of terrorism can we, must we, absorb?) 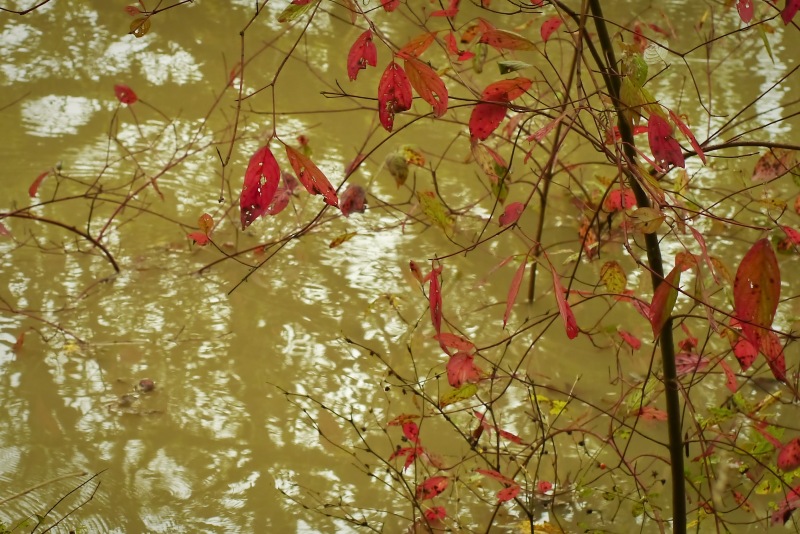 November – such a stunning ruin of a month. There is razor-sharp, dark beauty as nature takes its course, pruning and destroying.

(And what of the famous beauty of Paris today?) 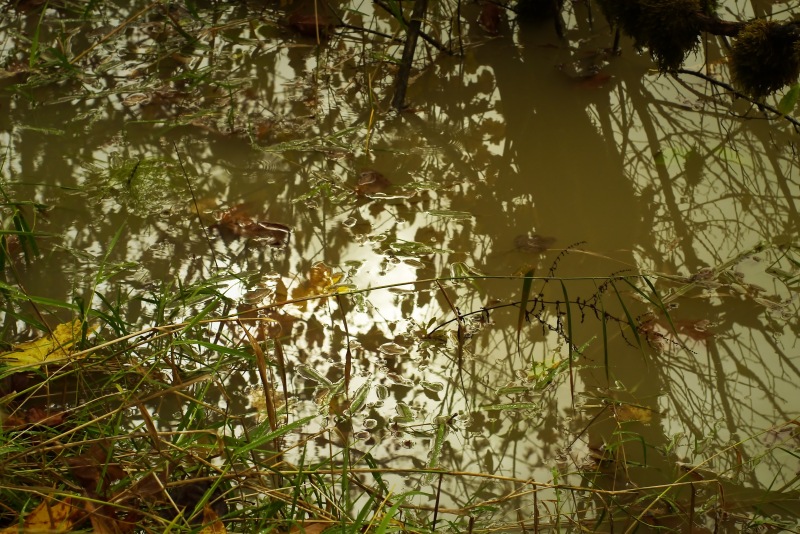 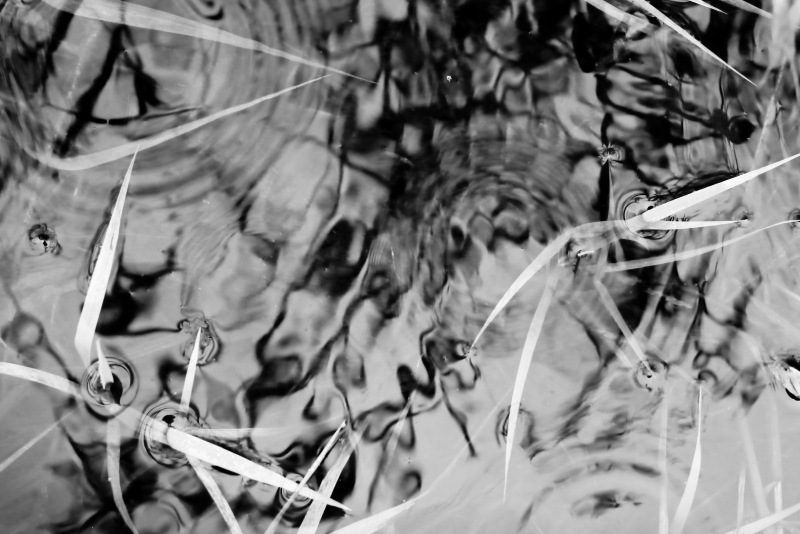 Following the river south to Fall City, I turn back north on Fall City-Redmond Road, making a wide loop around the valley.  I spot a narrow lane heading down into a sea of lichen-covered branches and stop to investigate. The rain spits and falters as I wander down the road.

There’s nothing dramatic here. No mountain vista or wide sea impresses the eye. A sign indicates that this bit of wetland has been preserved for salmon, the soul animal of Puget Sound. These tough fish continue to live out their life-rhythm, tracking between fresh and salt water and back again, thanks to people who took note of this modest little piece of land and kept it safe.

(Does the future hold that for us? Sould we narrow our beloved cities and wildlands down into safe preserves for people to live without terrorism?)

Rain soaks the scene into a sweet blur. 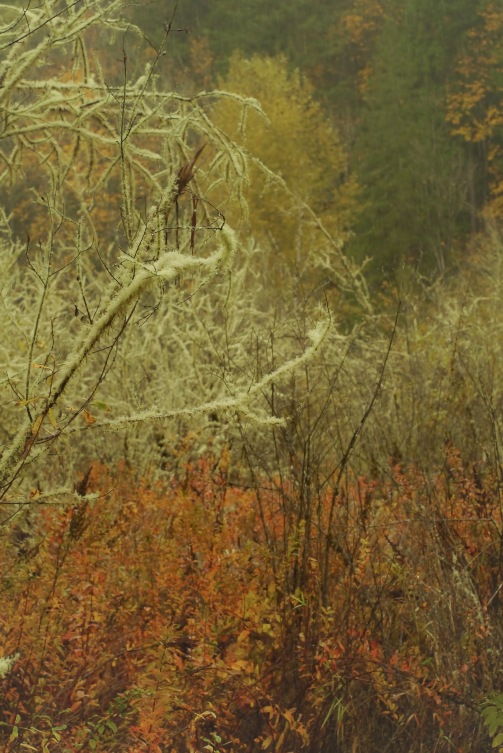 I can’t stay out in this too much longer – it’s chilly and my camera’s getting wet.

On a rise an old apple tree holds memories of fruitful summers. That could be the last shot of the day.

(And when will we hear the last shot of terrorism?)

to a skeletal essence. 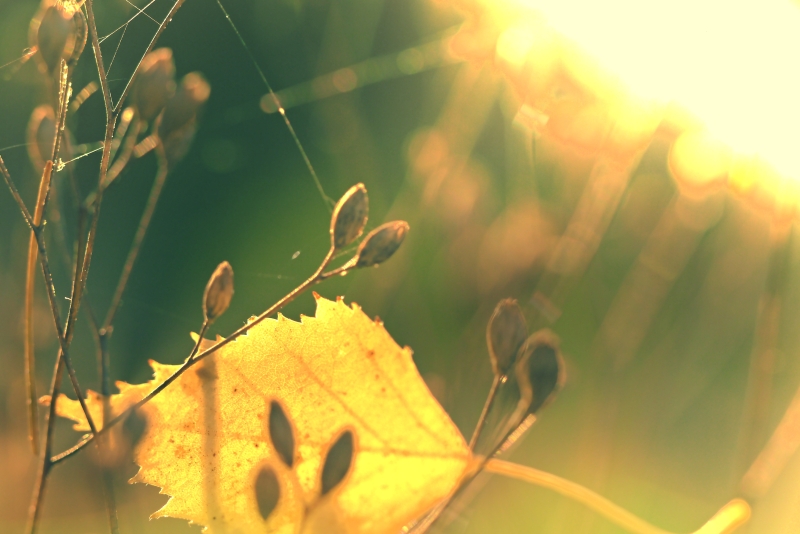 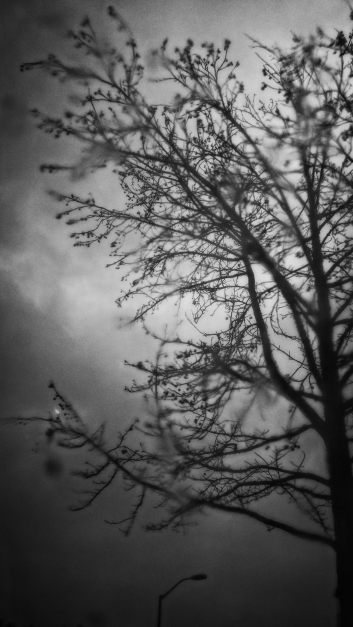 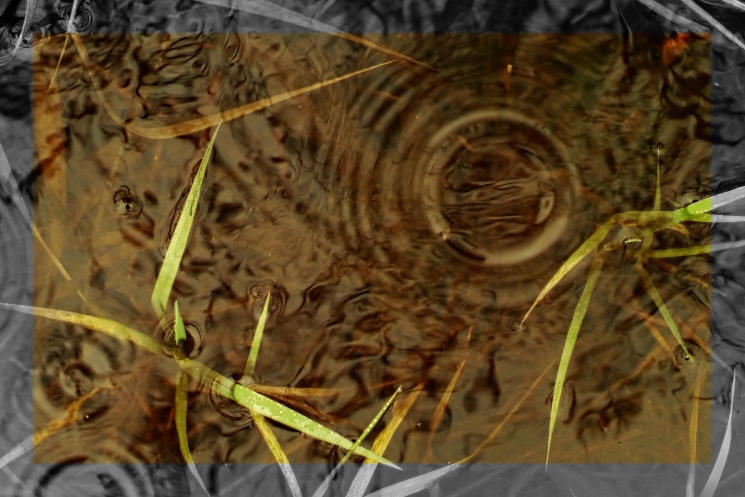 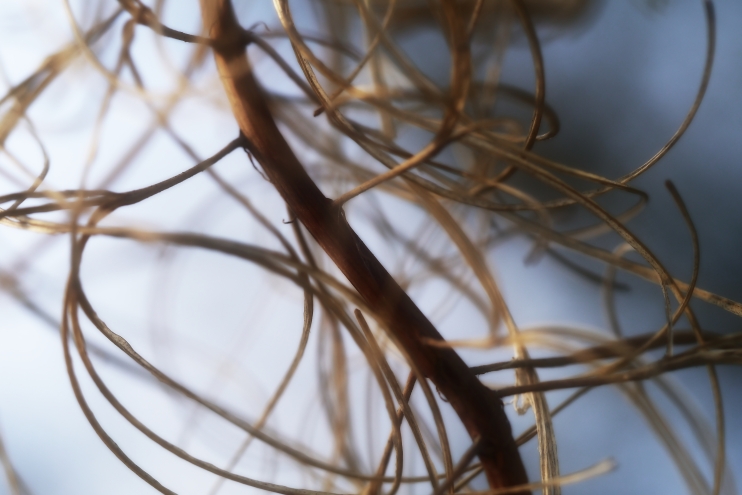 These photos were taken at home, in parks, in a parking lot, and on the road, with my phone and my Lumix. I experimented with processing more than I usually do, using On1. The last photo was shot with my phone as I drove home from work one day last week. Moody skies are back…