Last week we took another trip to Arizona. After flying from Seattle to Phoenix we picked up a bright red Chevy Trax SUV at Sixt Rentals and drove north towards Flagstaff, taking a scenic four lane highway (state Rt. 87).  It was a rainy day in Arizona – not what you bargain for when you’re visiting from the gray northwest, but the saguaros were beautiful in the misty blue air. We pulled over to the side of the road to take in the soft greens, tans and distant lavender blues. 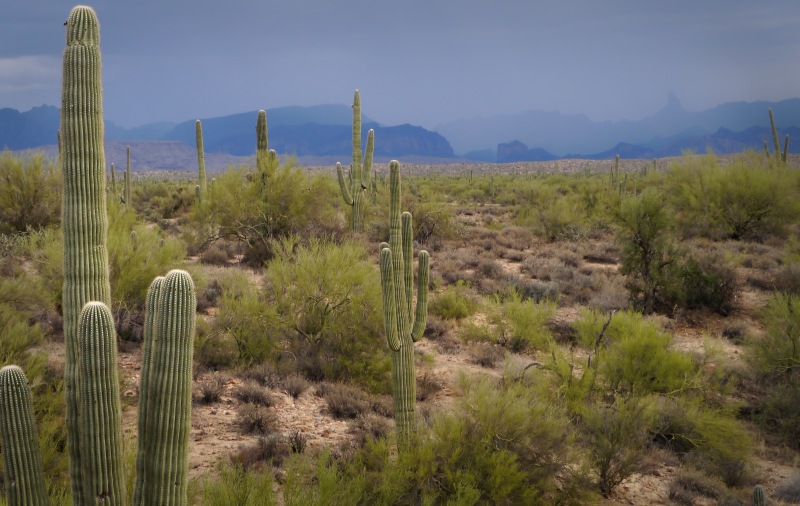 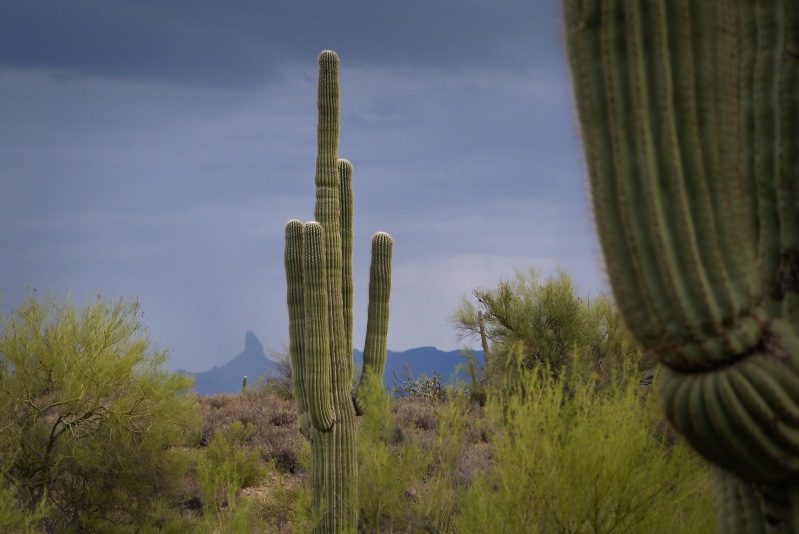 Our plan was to spend a few days at Canyon de Chelly, a national monument comprised of two large canyons whose layers of rock go back 200 million years. In the middle of the Navajo Nation, the site is miles from any city and has been inhabited for thousands of years. Because of the remote location it’s not overrun with tourists. I was eager to spend time among the great sandstone cliffs with their ancient dwellings and petroglyphs.

It’s a long way from Phoenix, so we over-nighted en route at a Navajo-owned resort and casino, which turned out to be refreshingly light on glitz and strong on tasteful elegance. An odd introduction to Navajo ways – but it worked for us!

On to Chinle, the town on the Navajo Reservation that’s the base for visiting Canyon de Chelly (pronounced shay).  On the way we passed through charming Winslow, a small town made famous by the Eagles song from the 70’s, “Take it Easy” – which folks seem to do in Winslow. They’ve capitalized on the song and made their town a tourist destination. A German man of a certain age dressed in black leather asked us to take his picture by a statue that memorializes the song. It happens to be on the famous Route 66. He had rented a Harley (he rides a BMW at home, of course, but this is America!) for an epic ride across America’s Main Street highway. Leave it to the Germans to swallow American pop culture whole, and show us how to really enjoy it!

It WAS a lovely morning for soaking in the classic American small town atmosphere. It didn’t hurt that the old style sweet shoppe makes an excellent macchiato. 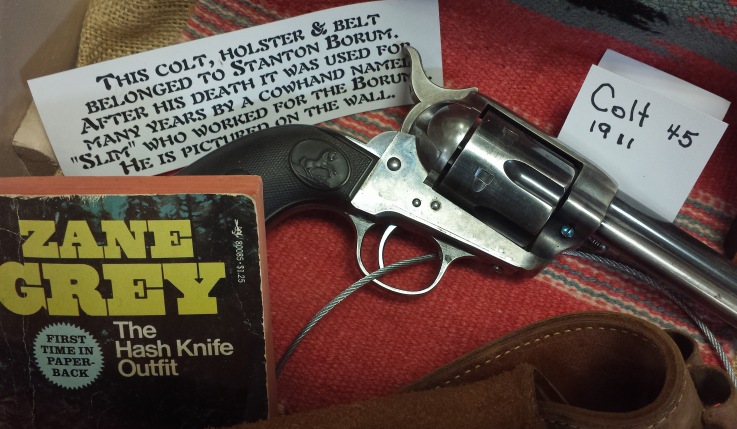 What a rip-roaring town it was, back in the day. 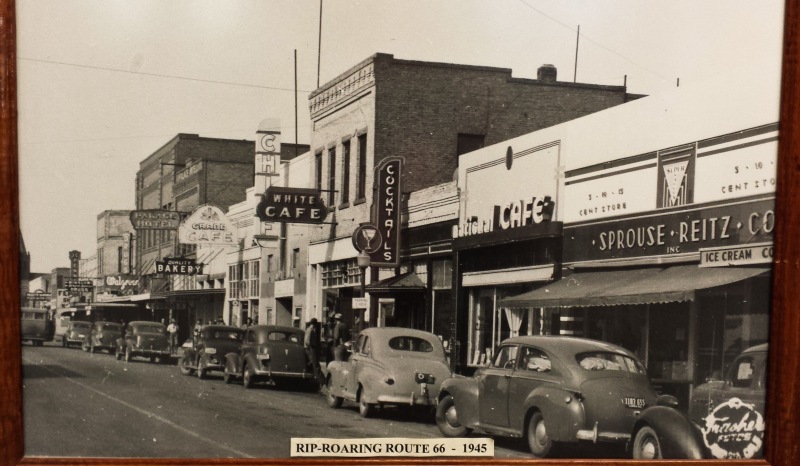 And it remains an interesting place. 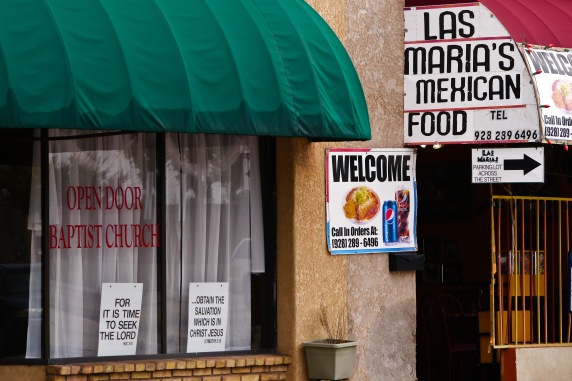 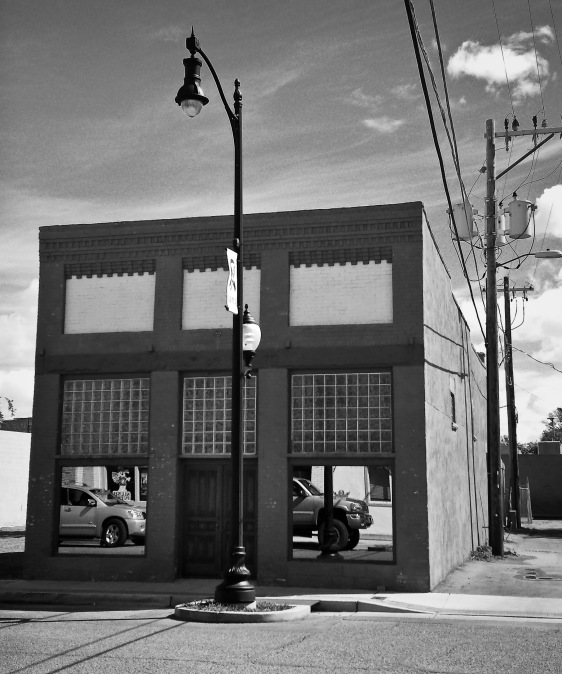 And on the outskirts – more to see.

We continued northeast, making a pit stop at Little Painted Desert, a county park. The Painted Desert covers a large swath of northern Arizona. As we ate sandwiches and took pictures, a stray dog and a raven were our only company.

The desert silence began to sink into our bones. 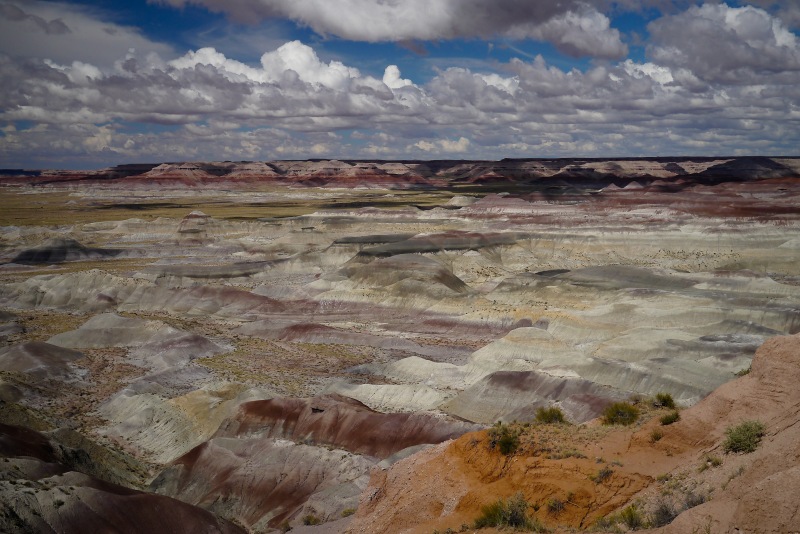 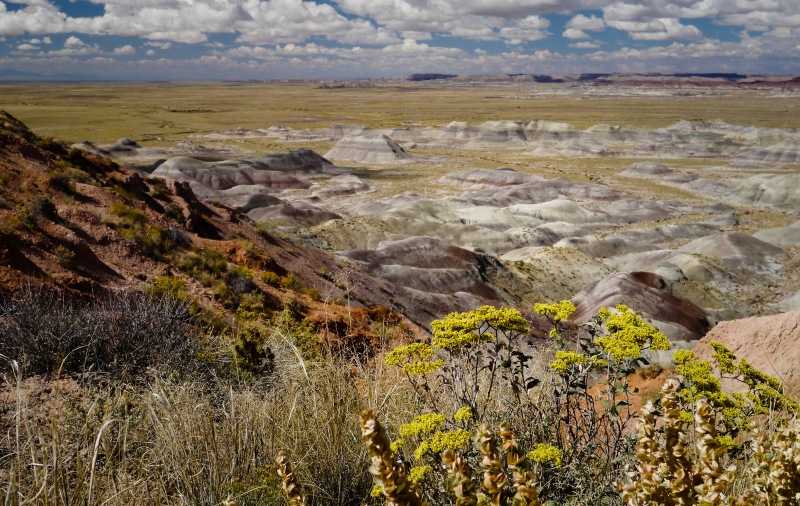 We were now in the Navajo Nation, whose boundaries extend deep into four states, encompassing over 27,000 square miles of land.  Within Navajo boundaries a separate nation, the Hopi reservation, is home to a people who are quite different than the Navajo. They have not been as successful at integrating into western culture and do not take to tourists and strangers as easily.

We drove onto the Hopi reservation but I took almost no pictures, as photography isn’t allowed and cameras can be confiscated. Parts of the reservation were rougher than places I’ve seen anywhere else. It truly felt separate from America.

We stopped at a home with a sign indicating silver jewelry was sold there. I knew Hopi craftspeople often sell their work from home, and prices, as long as you have cash, are likely to be better than at galleries or stores. We knocked on the door. The artist, Harry Nutumya, was there. He showed us his and his nephew’s work. A very soft spoken man, he told us quietly about going away to school and returning to live on the reservation. The Hopi have a long history and complex spiritual belief system that I wouldn’t dream of trying to describe. On a very basic level, our brief meeting with Harry seemed to exemplify how closely place and people are knit together in the desert – the high mesa with its open sky, sparse vegetation and expansive quiet matched Harry’s thoughtful persona. And yes, I was happy to contribute directly to supporting his work with a few purchases.

There’s our Trax, posing against the grasslands and distant mesas under that grand Arizona sky, with clouds all the way to the horizon. 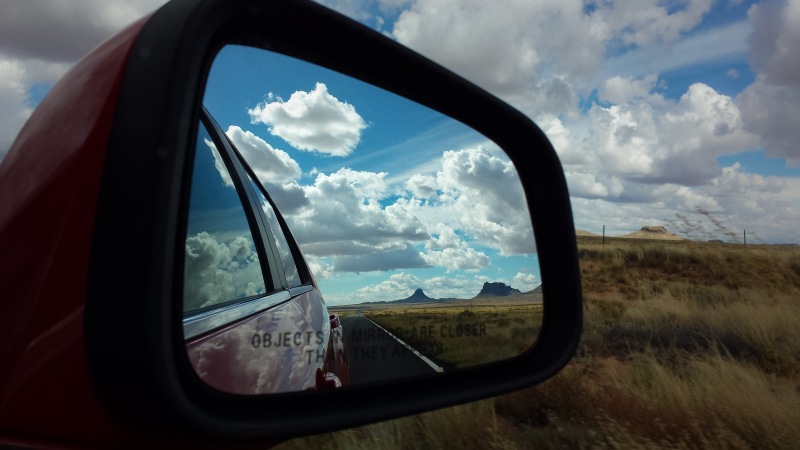 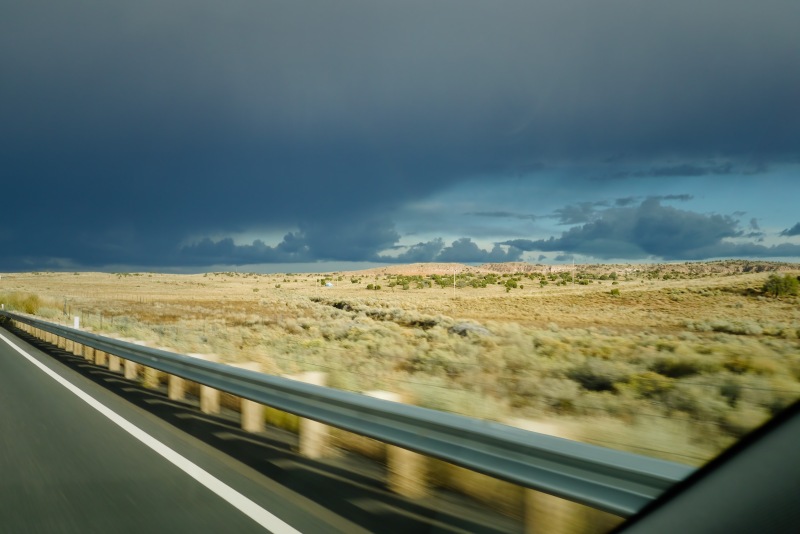 It really got interesting when we raced a rainstorm across the reservation, a rainstorm that produced double rainbows while keeping its center well away from us – perfect!  You can’t always stop when you want to, but maybe this conveys a taste of the drama of an Arizona desert storm.

The next day we spent all morning with a Navajo guide, bouncing across the bottom lands of Canyon de Chelly in his old jeep. Not ideal for photography, but a lot of fun. Outsiders can only enter the canyon with a Navajo guide and are admonished to respect the privacy of the few remaining people living in the canyon by not photographing them or their houses. It’s not a zoo after all.

It was a bit rough on the soft dirt canyon bottom lands – there aren’t roads exactly, just well worn tracks snaking through the canyons. 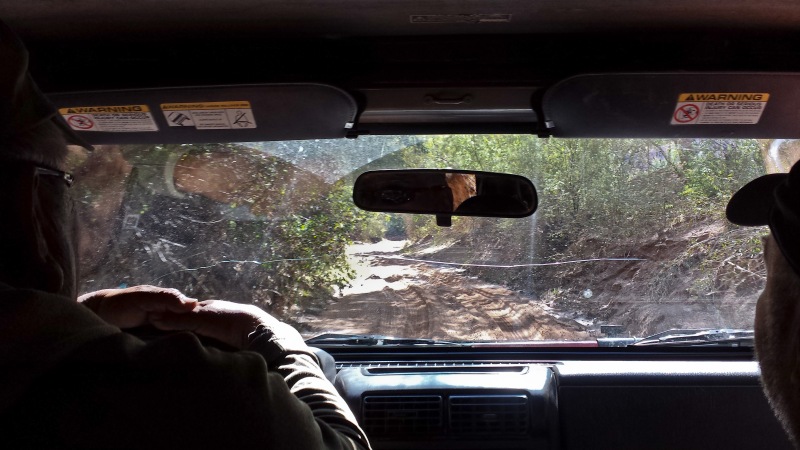 Below, one of many old Anasazi dwellings we saw. This one is called Antelope House. Most of the old places cling tight to the rocks high up the cliffs but this one is at the base of the canyon.

That rainstorm we passed through the day before left big puddles here and there. The guides take it in stride, plowing through the water to give tourists a closer look at petroglyphs on the canyon walls. Above and to the right of the jeep are drawings of people on horse, a common theme. 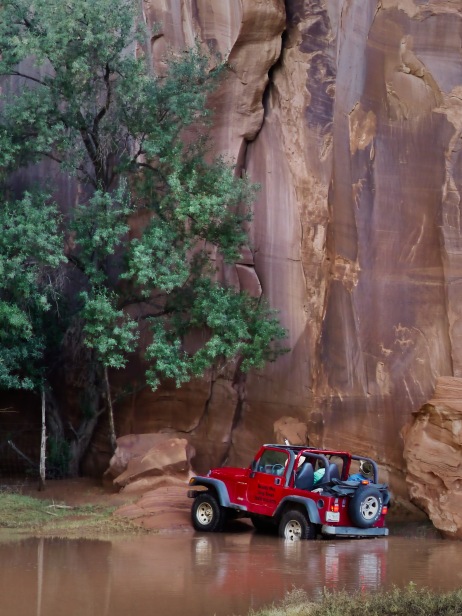 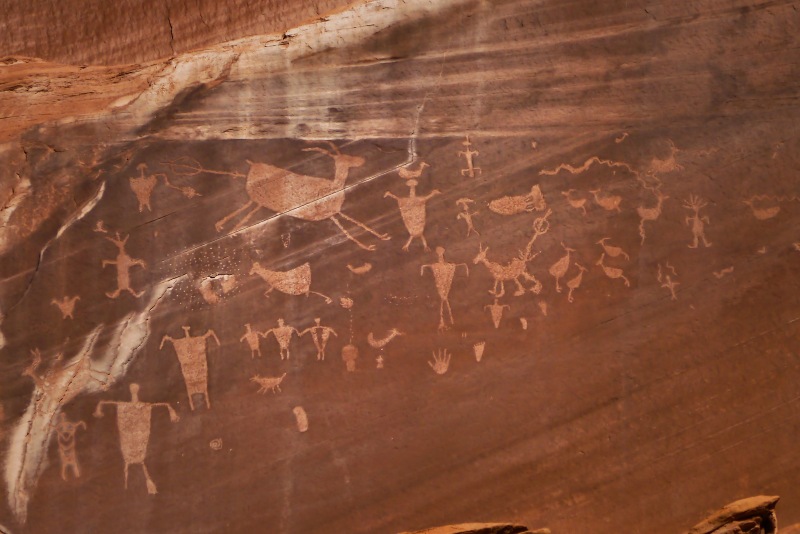 You can’t get very close to most petroglyphs or dwellings; many are high and out of reach. Our guide described climbing up with hand-made ladders in his younger days; the ladders used to be pulled up as you went, so no one could follow.  If you had plenty of time, a long lens, a tripod and good light I’m sure you could get great photos of the ruins.  As it was, I didn’t have the right mix of circumstances, but that’s the way it goes. It was rewarding just spending time with our guide on his turf.  Towards the end Dave, who was born and raised here and seemed to know everyone, talked a little about his clan, and how his mother blew corn pollen over him when he was a baby – an ancient practice that gave us a tantalizing glimpse into a culture that still thinks very differently from people I normally come into contact with.

Later we drove along the south rim to see places we had just driven through from far above. Water flows in the creek alongside the track.  A few people still raise a little corn down there, and peach trees grow near the native cottonwoods and willows. 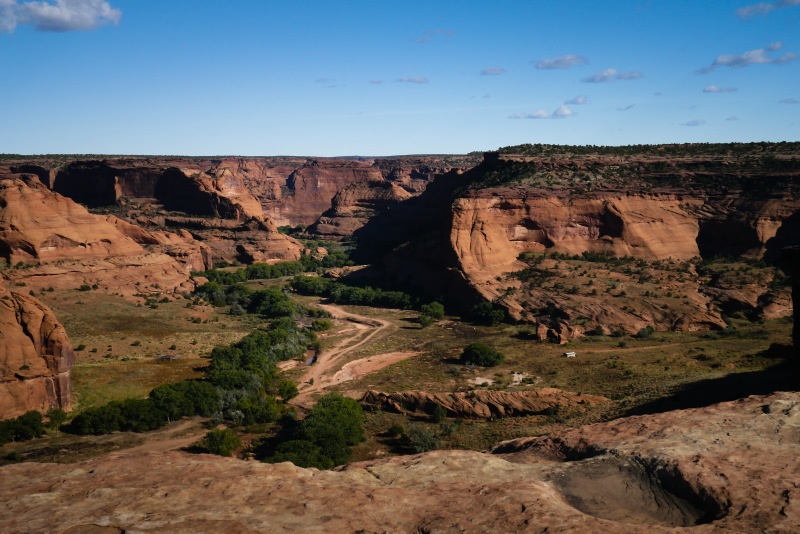 The famous Spider Rock was half concealed in deep shade by the time we reached it.  The next day we drove the rim of the canyon in the morning, and again it was in shadow. But if the canyon didn’t cooperate, the ravens did. 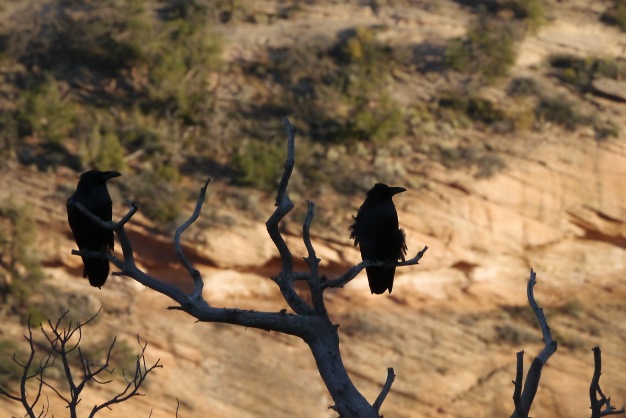 I’ll leave you with their gentle presence. There’s more to come on the Arizona trip…

This entry was posted in rural and tagged Arizona, Canyon de CHelly, Winslow. Bookmark the permalink.