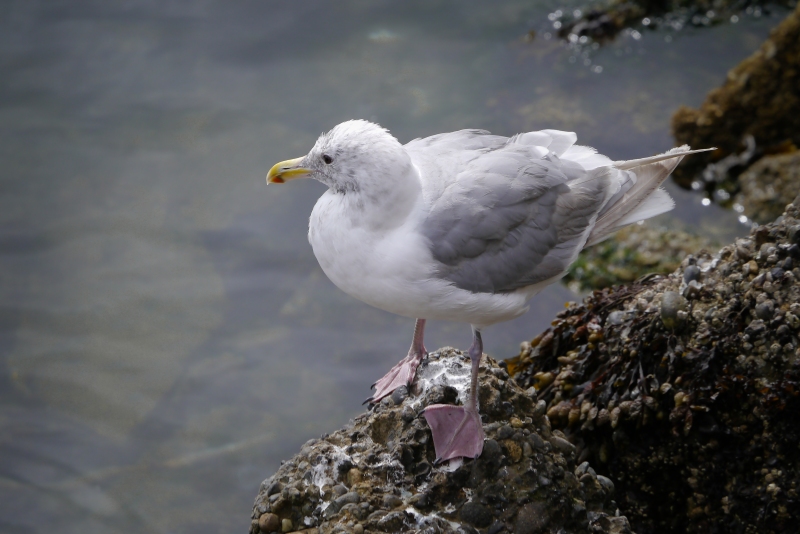 Nutrient-rich, productive waters are the draw at Sekiu (see’ kew), a fishing village on the bountiful Strait of Juan de Fuca.  In August we enjoyed a few days in the area, staying at Curley’s Resort, a very laid back, somewhat ramshackle hotel that caters to sport fishermen. The modest rooms and lack of pretension suited us – it didn’t feel like anyone was out to impress us. After all, the view speaks for itself.

The activity in Sekiu appeared to be about 99% devoted to fishing. We were the other one percent, hanging out, watching the scene, striking up conversations, and taking photos.

Each morning fog obscured the small boats as they motored out to the strait for a day of fishing. As fishermen returned with their plentiful catch, gulls, crows and eagles swirled and swam around the marina, loudly negotiating easy deals on fresh salmon. It was amazing to see how much fish the men threw out to the birds. Miles away an ocean canyon off the coast funnels nutrient-rich water that surges upwards and flows into the strait. The mixing of currents is thought to result in the unusually productive waters, full of phytoplankton and krill, which are key species in this environment. 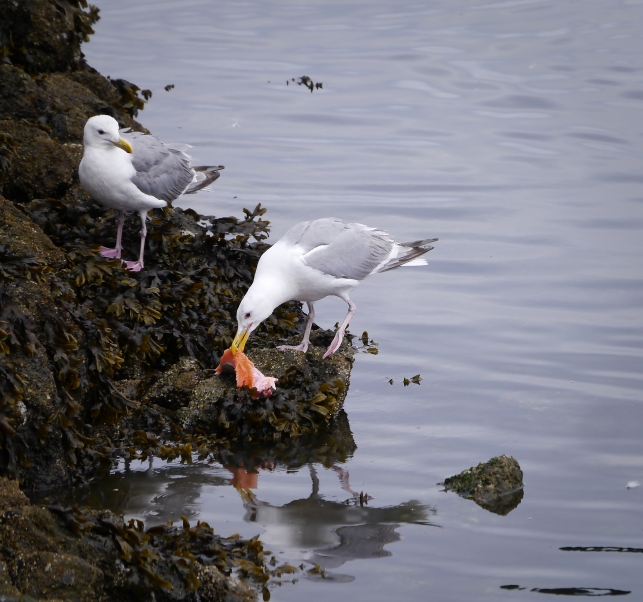 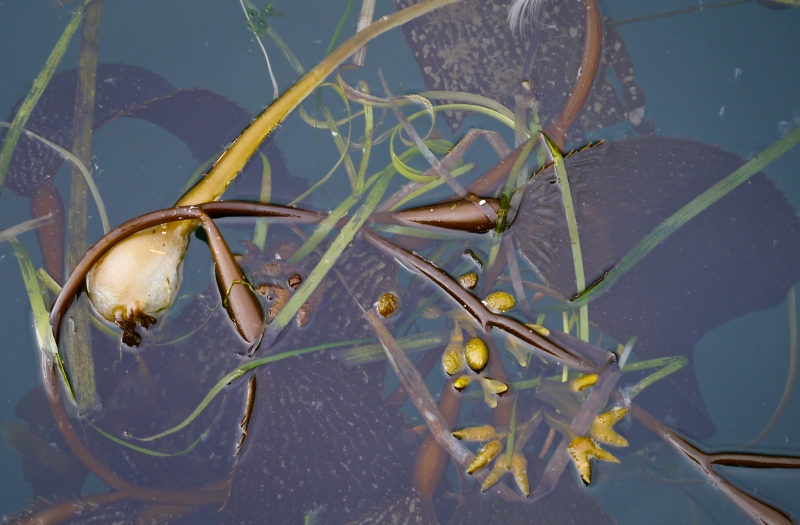 Tangles of kelp and seaweed are evidence of the wealth of food in these waters. We watched as a young man received wisdom from an expert on filleting techniques. 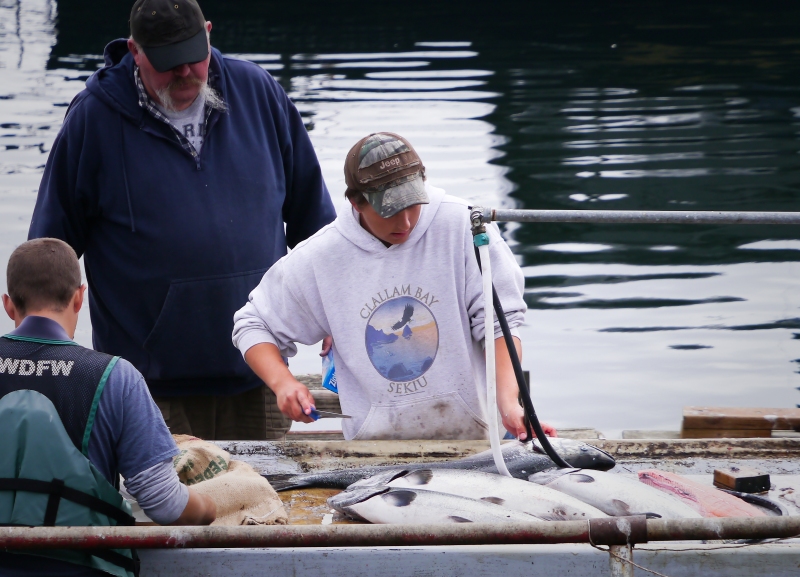 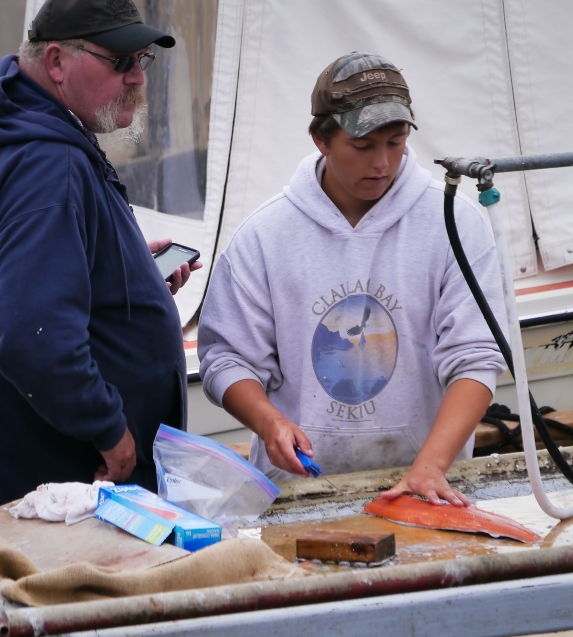 On another pier, a disabled vet was slowly restoring himself by repairing large wood sculptures that he created years ago. He patiently worked the wood, plugging holes made by rough weather, an obvious metaphor for healing wounds from long ago in Vietnam. 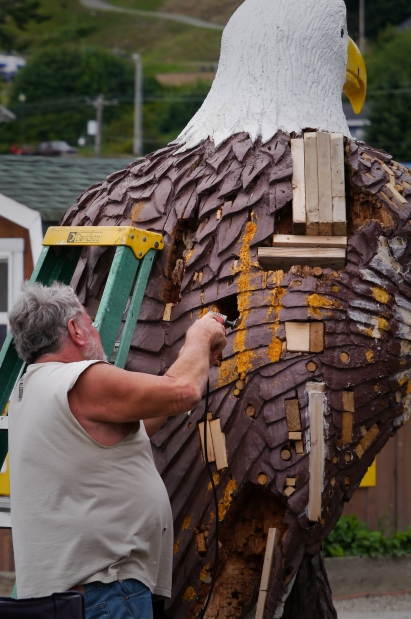 The “resorts” here sell lures and flashers and whatever gear you might need, including rags at a nickel each. Our room came stocked with a plastic bag full of clean, torn toweling and signs encouraging us to use the rags, not the bath towels. We didn’t have the problem of having to clean fish – we left it to others, and had a fantastic meal one night of freshly caught salmon. We did lose a pair of shoes though, after walking through the muck at low tide at a nearby bay. The fun in this part of the world isn’t always clean.

On the store walls, old photos of the area hang askew. Outside, wildflower vines climb the deck and the scale hangs ready.

Sekiu (pronounced seek-yew) is a very good place to be a gull! 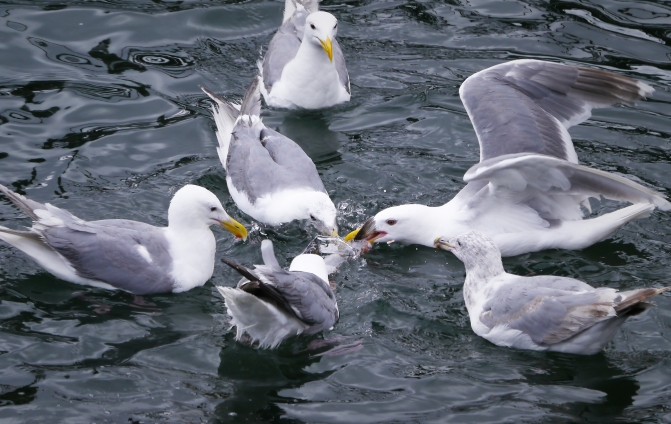 And that morning in August, it was just a great place to be.