A Spring storm gathers over the Snoqualmie River, about a half hour from Seattle.  Clouds obscure looming Mount Si, even as the sunshine brightens the trees. The first bloom of dandelions has already gone to seed.

At my feet, the graceful curves of a freshly unfurled Lady fern echo the relaxed bow of rain-soaked grasses.

Up the river, lily pads interrupt the shimmering reflections of tall cottonwoods.

Finally the clouds break and Mount Si appears, but whispers of cloud still cling delicately to its flanks. 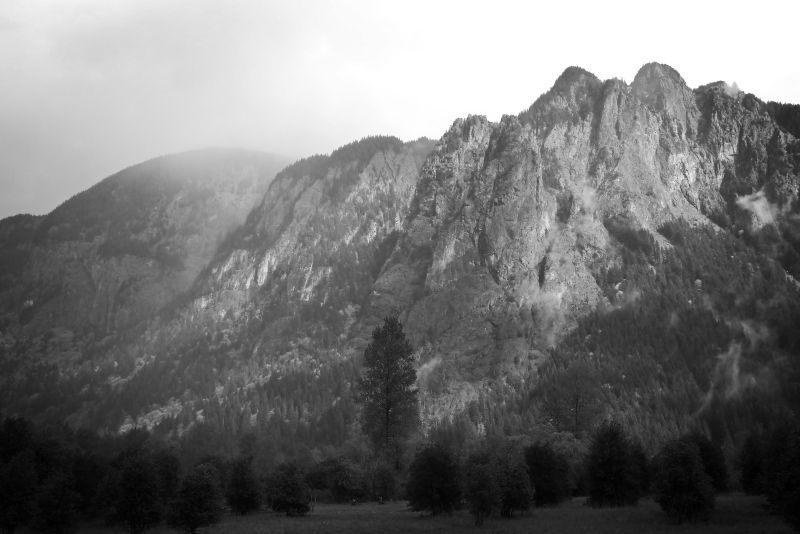 With all the intense acid greens of new foliage clamoring for attention, I thought it would be interesting to try processing these images in black and white. 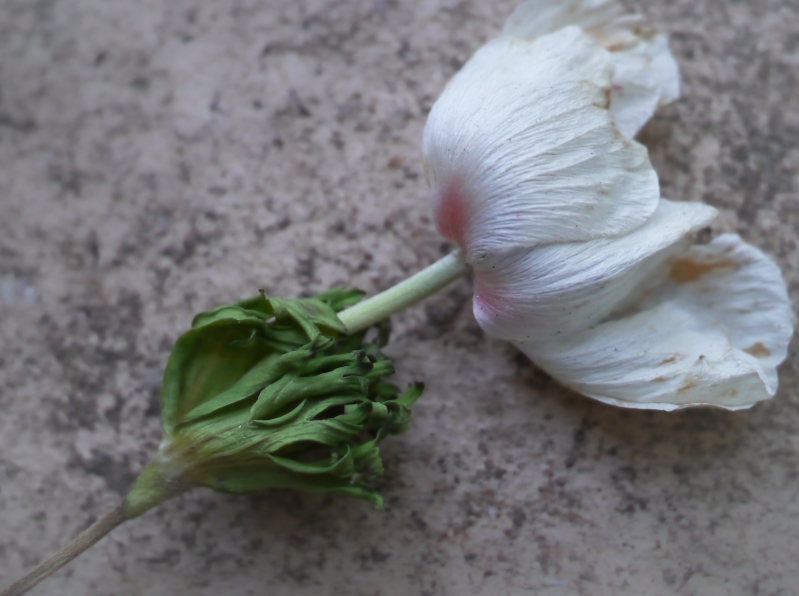 Anemones! These beauties were an unexpected gift when a delivery was wrongly made to our door. I have enjoyed watching them bloom and fade over the course of several weeks. They have always been a favorite flower (but then, I have so many favorite flowers!) for their color and balletic form, and especially for their graceful slow fade.

Anemone coronaria is widely grown for its decorative flowers. Numerous cultivars have been selected and named, the most popular including the De Caen and St Brigid groups of cultivars.[2] The De Caen group are hybrids cultivated in the districts of Caen and Bayeux in France in the 18th century.  Anemone coronaria means crown anemone, evoking regal associations.

In Hebrew, the anemone is calanit metzouya. “Calanit” comes from the Hebrew word “cala כלה” which means “bride“, “metzouya” means “common.” The calanit earned its name because of its beauty and majesty, evoking a bride on her wedding day.[6] In 2013 Anemone coronaria was elected as the national flower of the State of Israel, in a poll arranged by the Society for the Protection of Nature in Israel (החברה להגנת הטבע) and Ynet.[7]    Anemone coronaria grows wild all over Israel, Palestine and Jordan.

A haze of fresh greens in the woods behind the house…

Morning dew on the grasses at water’s edge…

A Lady fern unfurling across a weathered fence… 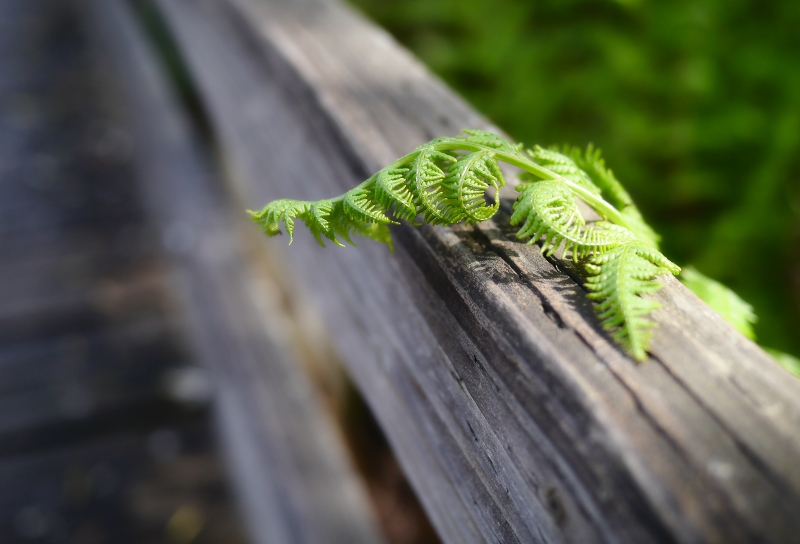 Willow and Cottonwood springing to life in a wetland park…

The softness of a willow catkin… 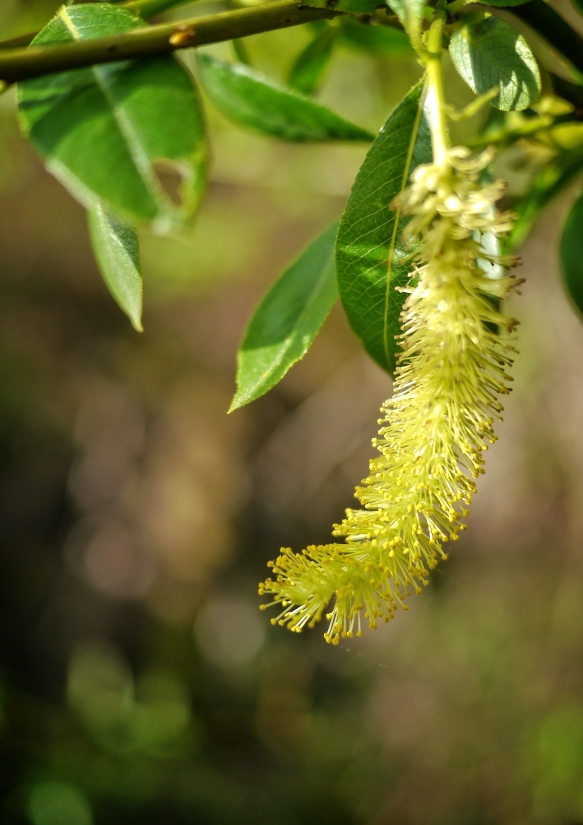 And the final petal of a Magnolia blossom, ready to fall… 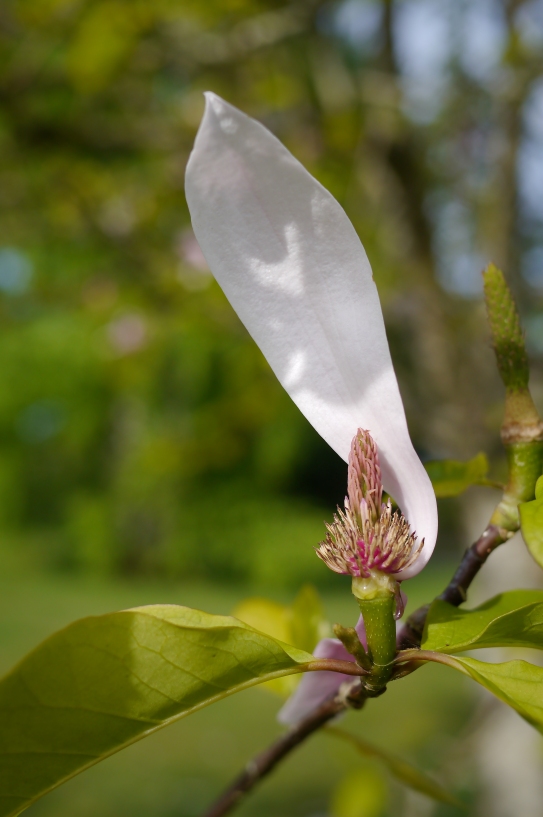 Spring evolves so quickly – birds silent all winter already are singing incessantly, the cherry blossoms are almost gone now, the lilacs are in bud, and soon peonies and irises will startle us with their beauty. One aspect of the Pacific northwest climate I’ve come to appreciate is the long, cool Spring. On the east coast the weather warms up fast and steals Spring right out from under you.

But even with cool temperatures extending the bloom time here, it still rushes by too quickly. I get neurotic about not taking it all in, not “having time” (as if time was something I could have!) to experience it with all my senses.  I roam ceaselessly – a Japanese garden, a native plant nursery, a nearby island, local parks – and take photos along the way. I rush too much. The photos disappoint.

But… what matters is that Spring carries itself forward with no help from me, it takes me along, and I do so love it.

of blossoms and buds, 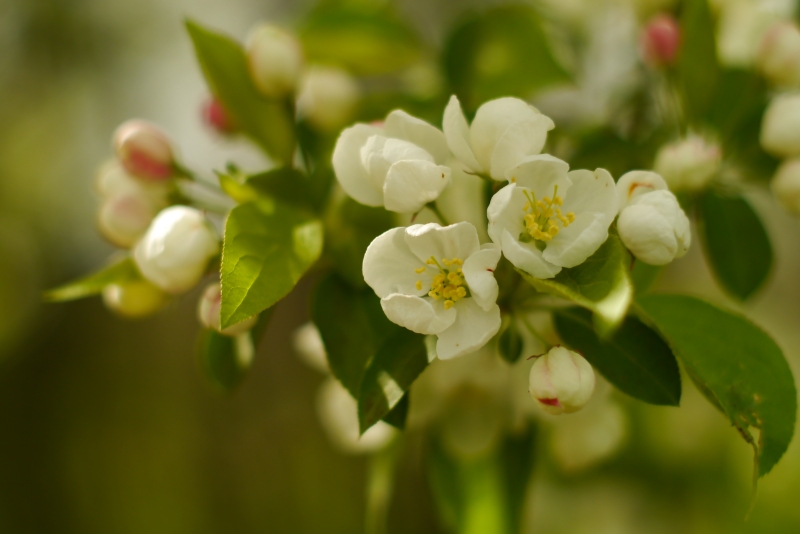 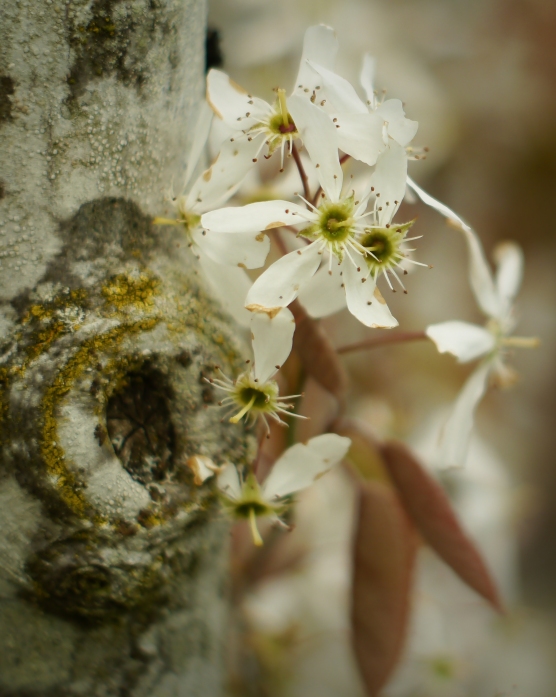 Lichens on a twig… 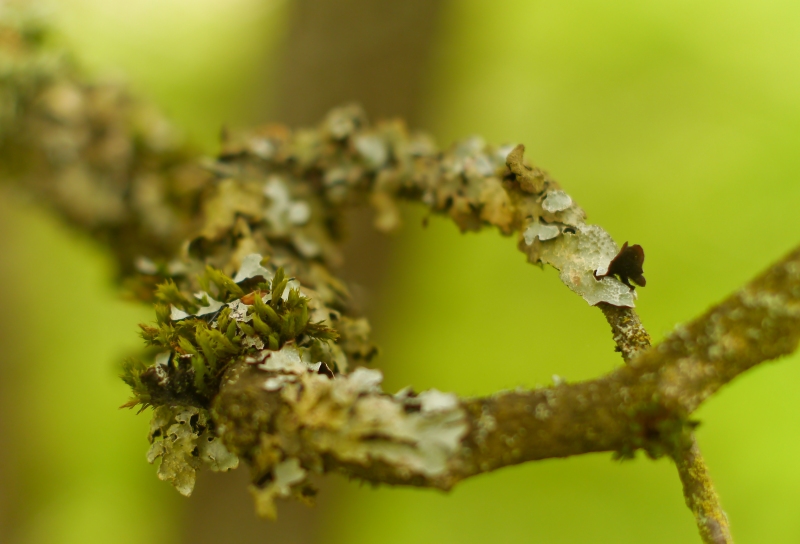 A blur of Spring color, for the WordPress Weekly Photo Challenge. 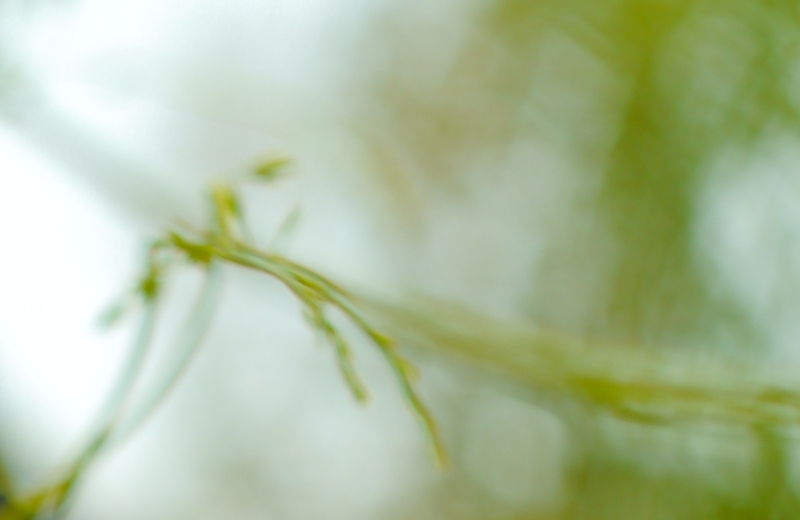 Join me for a Spring woodland stroll, followed by a stop at an unusual market on the way home…

Trilliums are lighting up the woods. This elegant wildflower was rare where I grew up, in upstate New York. When I found one it would be a thrill, and I’d run home to tell my mother. Later, when I lived in and around New York City, I had to travel far afield to find any at all. Here in the Pacific Northwest, they are quite common in the woodlands. On a Sunday walk at a nearby preserve, we were struck by the way the trilliums were scattered through the forest – sometimes along the path, other times back behind the evergreens, always adding grace to the surroundings. 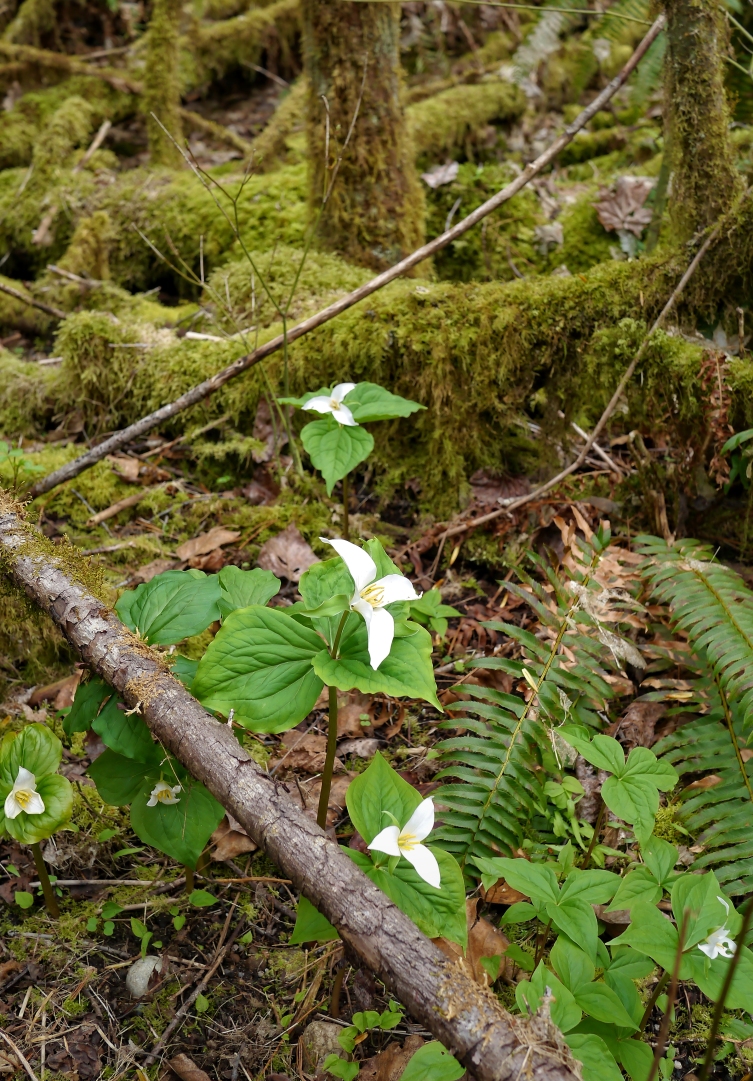 The Western white trillium, Trillium ovatum, is related to similar flowers in Japan, China and the Himalayas. The trillium I sought as a child is Trillium grandiflorum, an eastern North American species that’s a little bigger. It’s a desirable garden plant, providing a striking accent to woodland gardens in Spring. It is difficult to propagate though, with a low seed germination rate and years until its first flowering. Apparently, many trillium plants sold in nurseries are collected from the wild instead of grown from seed.  Herbalists collect the plants too (it’s also called bethroot, or birthroot). There’s no clinical evidence as yet that it works, but indigenous peoples in this area also had uses for trilliums. 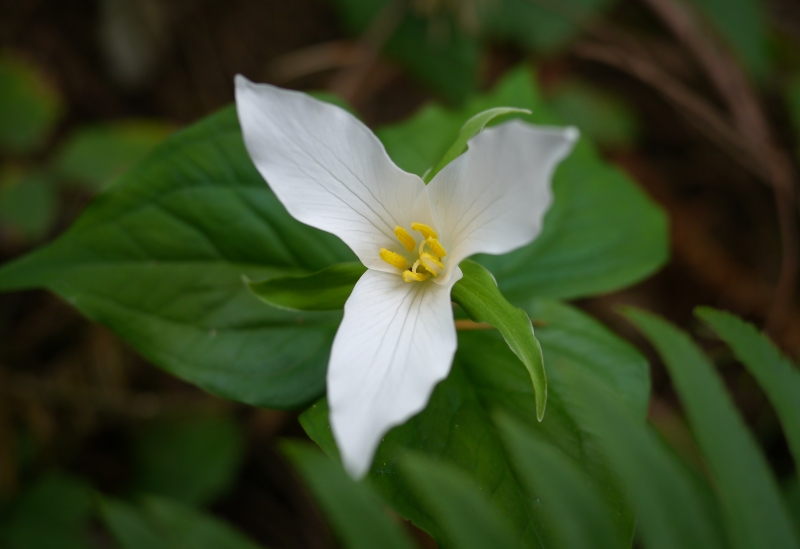 We were struck by the size of this tree in a stand of Western Hemlock.  When I looked closer I realized it wasn’t one of the typical evergreens we see around here – the Douglas firs, the hemlocks, the cedars. With binoculars, we peered way, way up to the top to find a growing branch.  I saw long needles and realized it was a pine. Pines are unusual in our area but plentiful just over the Cascade Mountains, on the drier side of Washington. 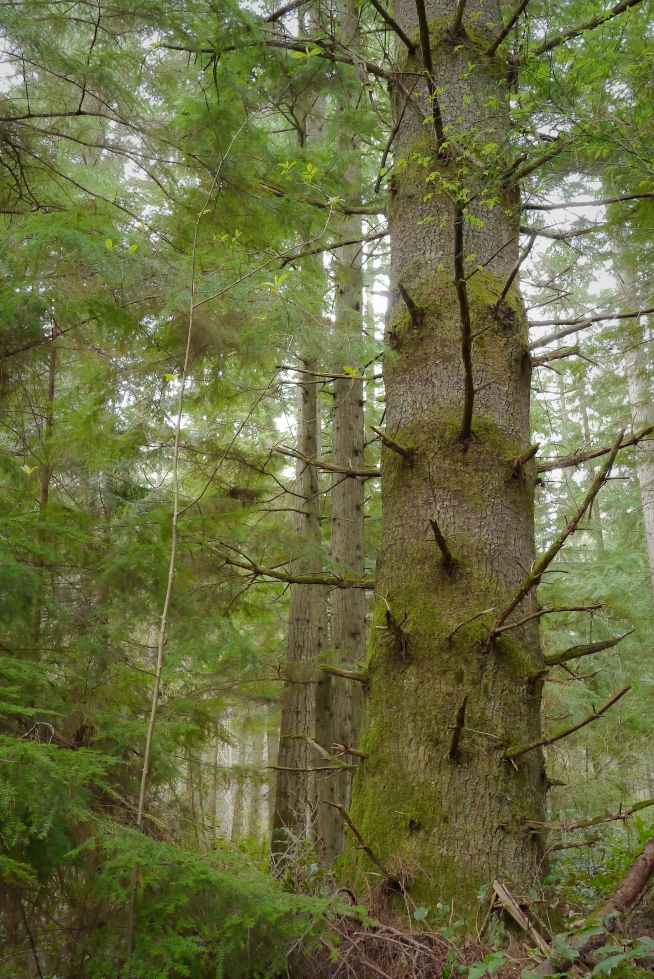 The ground was littered with pine cones and needles – I could have put two and two together, but the mind is stubborn, isn’t it? I just didn’t expect a pine in this forest.

It’s a Western White Pine. I found out later that there would be more of them if a fungus that arrived in Vancouver, Canada, a century ago hadn’t gotten loose and killed most of them. But this one survived, and it was impressive. 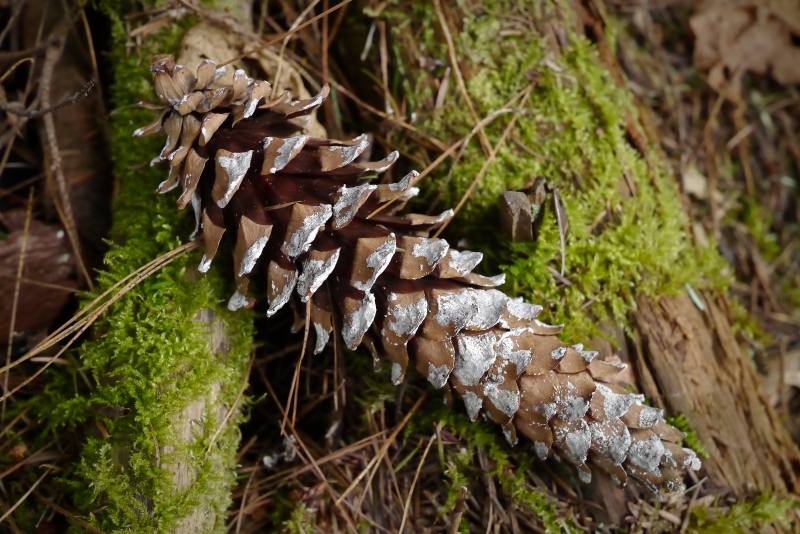 Across the path, two Vine maple leaves from last year adhered to a felled log. The land once belonged to a local family that homesteaded here in 1898. The family periodically logged the woods, and you see the evidence of their labors here and there. Luckily that giant pine went uncut.

The property was appraised at well over 4 million dollars a decade ago, when government and conservation groups joined to purchase and protect it. It includes important salmon streams. So much land is parceled out and sold in pieces over the years, but this area stayed in the family, and the family did the right thing by selling it for preservation. Their old log cabin may still be there, but we’ll have to go back another day to see.

Light streamed through a curtain of Western Hemlock branches  – 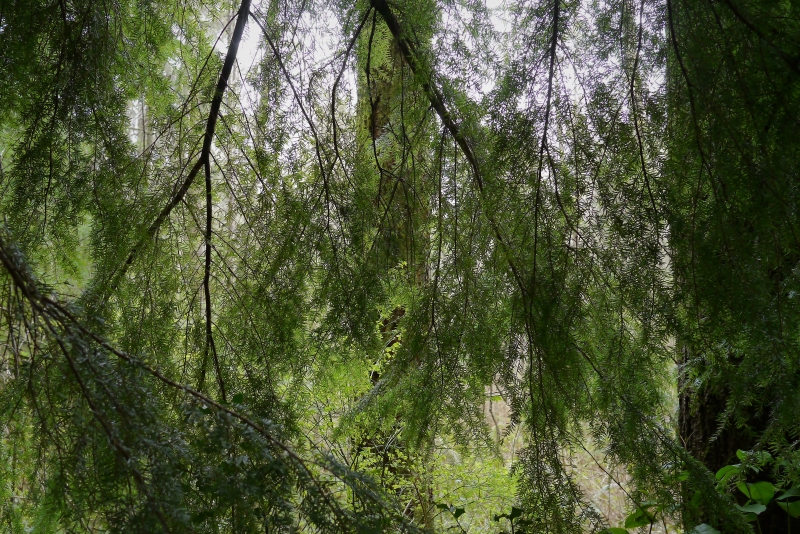 The Red Huckleberry was budding. It has green stems and branches, and a delicate, slightly zigzag growth habit.

Punctuating the wild experience with a more domestic one, we stopped at a market which is attached to a nursery. The market sells locally grown veggies, and eggs from their own chickens. They also keep a few sheep, goats, ducks and peacocks, so families often stop by for a free mini zoo experience. It’s a lot of fun. The peacocks were in splendid form, doing their thing for the females, who of course ignored them.  Their feathers vibrate as they display, making an interesting sound, and even from behind they are amazing. I was thinking how wonderful it is that this crazy, spectacular bird can live well in captivity, allowing so many people the pleasure of being moved by its beauty. 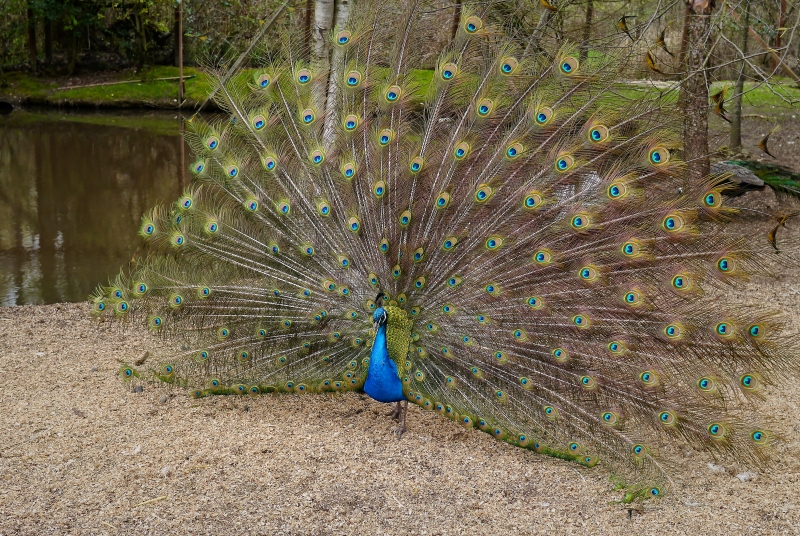 While we were admiring the peacocks an employee drove by in a beat up pick-up truck to gather the eggs. The truck bed was filled with wide bowls holding dozens of pastel colored eggs. I think this coop was his last stop – where could he fit any more? The truck bed was full and the passenger seat was, too.

And yes, the chickens were mad. 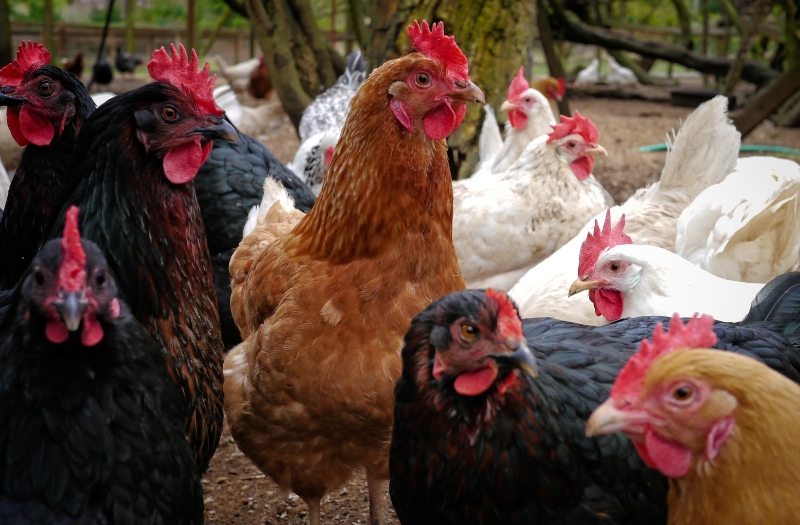 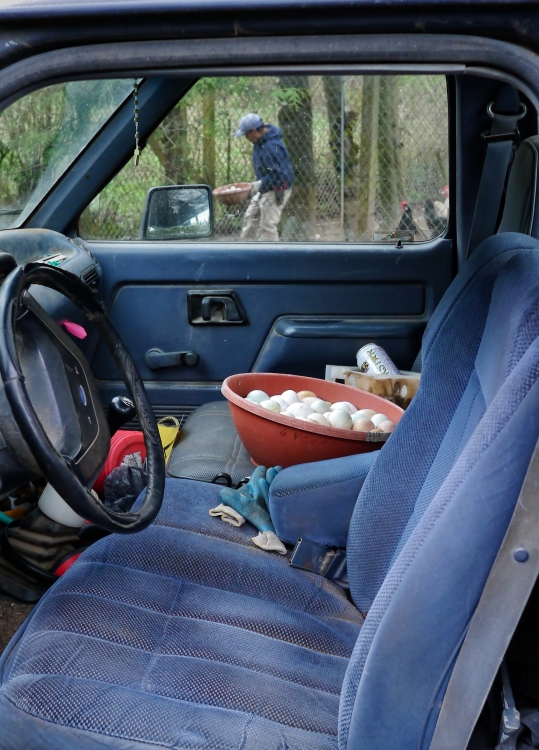 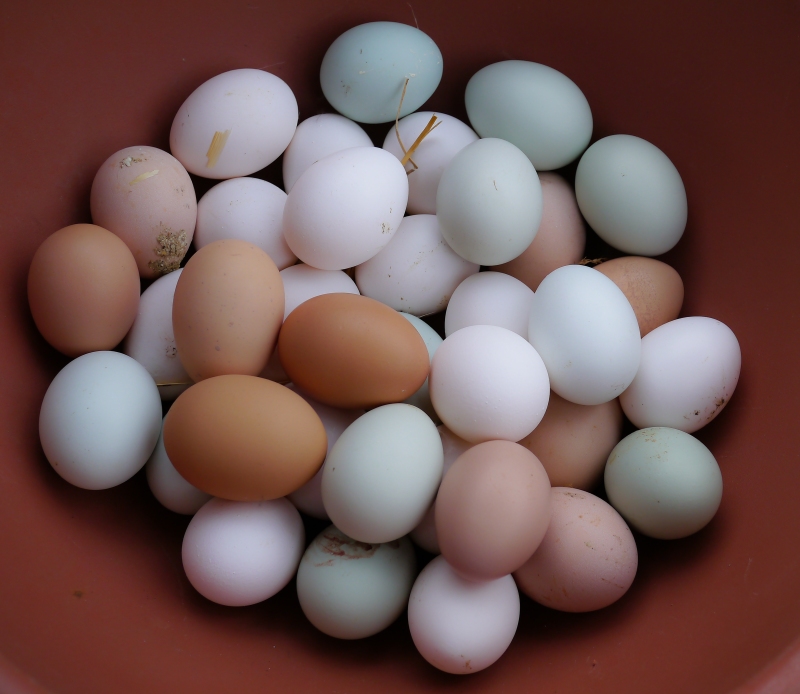 Flowers were set out in front of the market. I was struck by the similarities and differences between the white tulips and the trilliums I’d admired earlier. 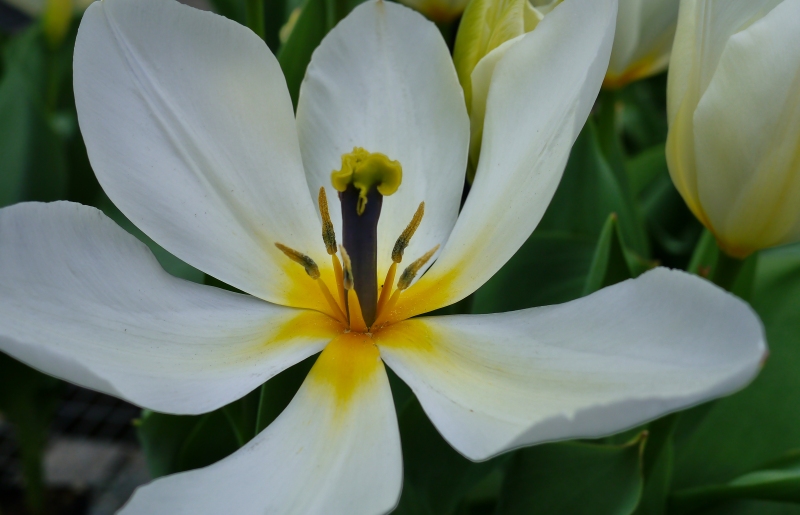 Two Spring flowers – both elegant, white, in threes and sixes (leaves, petals, stamens) – one long domesticated, the other will probably never be tamed.

There is something comforting about a walk in a wild woodland, followed by another walk in a managed outdoor space. Both were vibrant with the colors, sounds and smells of nature in Spring.