A photo of a neighborhood cafe that I took in April, 1973 on St. Simons Island, off the Georgia coast: 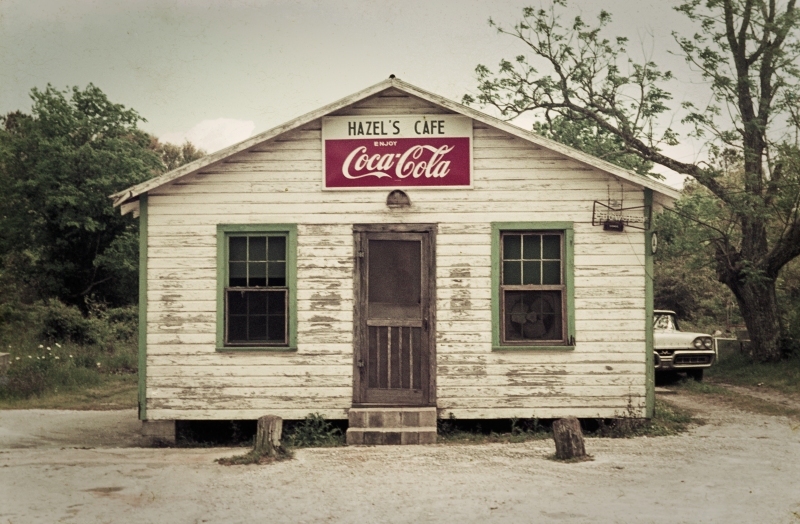 Hazel’s still stands, at 1166 Demere Rd on St. Simons Island, GA.  If you google the street view, you’ll notice the paint is long gone and the car no longer lurks in the background.

My maternal grandparents retired from Manhattan to a rambling home on neighboring Sea Island in the early 1960’s. We spent Easter vacations there every year. When I was old enough to drive I would borrow the car and go exploring. The best finds were places like this, that exemplified the island’s rich history, or discovering a small treasure trove of old 45’s (Billie Holiday, Dizzy Gillespie) in a little record store on the mainland.  I explored a marshy pond off a back road and found alligators – a little too close for comfort – and a black bird called a Smooth-billed Ani, which was very rare in Georgia.

Some things endure, some don’t.

I’m white, and the privilege of my race and class afforded me many wonderful experiences in Georgia back then. Not so much the local African American population, most of whom were employed in service to whites, worked long hours and likely didn’t have the time and freedom to wander around anywhere they wanted, in search of interesting sights.

The ease of being Caucasian endures in this country, and the challenges of being African American can still be life-threatening.

Hazel’s cafe apparently endures too; unfortunately I lost the 45’s.  The nameless cafe in the header photo is probably long gone, and alligators are probably scarce in the area, with all the developments and golf courses, but the Smooth billed Ani is still considered a vagrant in Georgia.