On Saturday I walked through Mt Rainier’s colorful alpine meadows and photographed the views and wildflowers. It was a gloriously clear September day on the mountain.  Flowers long gone to seed near my home are in peak bloom now at 6000′, and species that would never show their faces at lower elevations were in evidence, too.

One little beauty revealed itself better after I got home and looked closely at the photo.  It’s called Grass of Parnassus (Parnassia fimbrata) though it’s not a grass and does not grow on Mt. Parnassus!  A fine, squiggly fringe protrudes between the five delicate white petals, and the five stamens are split into glistening hooks. I probably had seen it before but I didn’t remember it’s name. When I looked it up and saw that it was called Grass of Parnassus, there was my mother’s voice, saying that name in my ear. I was instantly transported back to the Blue Ridge Mountains of Western North Carolina.

My mother especially loved the little wildflowers that grow close to the ground – the ones that demand a closer look. We would go for drives and hikes up in the Blue Ridge Mountains when I visited and she would point them all out – “Oh, that’s a Stiff Gentian – Nodding Lady Tresses – Grass of Parnassus.”  Under the trees around her home she planted the native wildflowers that suited her location, delighting in their return each spring.

In October 1998 she returned from a trip to another mountain range, the Italian Alps, feeling slightly ill. She made an appointment to see her doctor and a round of referrals began, which ended with the shocking news that she had pancreatic cancer.  A vital, healthy 75-year-old, she was never sick and rarely even caught a cold. In those days a pancreatic cancer diagnosis meant 6 months to live. Maybe.

She stubbornly refused to schedule any treatment until after Thanksgiving and Christmas had been celebrated according to family traditions. After the holidays her friend Martha drove my mother to Duke University Hospital, where she had exploratory surgery. I flew down from New York and waited nervously that day in the hospital, but it was a short wait – the cancer was inoperable.  A month or so later my mother began the grueling chemo and radiation regimen doctors prescribed as the next best thing to surgery. Every few months I came down to help out.

Late summer brought a brief reprieve in the disease course, allowing her to attend the local outdoor classical music festival she so loved.  And one day we  drove back up to the Blue Ridge Parkway. She didn’t have enough energy for a hike, but we explored the rocks near the road, where she showed me the Grass of Parnassus. 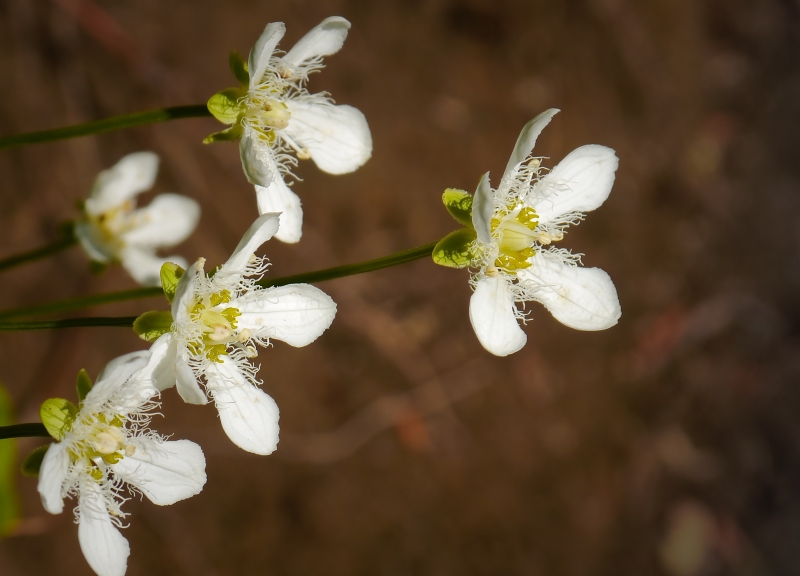 It turns out that several flowers go by that name. The pretty little flower I photographed on Mount Rainier and the one my mother loved are very similar.  Both flowers reward us when we take a close look – the western version with it’s fancy fringing and the eastern flower with its subtle tracery of veins. Here’s the flower my mother showed me that day (photo by Craig Fraiser of Arkansas):

My mother managed to celebrate one more Thanksgiving with her family. As Christmas approached she must have vowed to make it that far, no matter what.

At dawn on Christmas day she took her last breath in her own bed, the humble little wildflowers at rest underground in the woods around her home, waiting for spring.