“Stillaguamish” is the lovely tongue twisting name of a wild river that runs from the Cascade Range into Puget Sound. Named after the people who originally lived there, it is fed by the North and South Fork Stillaguamish Rivers – forty combined miles of scenic, salmon-rich, flood-prone waters tumbling through mountains, foothills and farmlands.

Recently we took an afternoon walk on Lime Kiln Trail in the South Fork Stillaguamish River watershed. Formerly logging land and now a county park, the forest is scattered with giant cedar stumps – evidence of a landscape which must have been jaw dropping to anyone who saw it before logging eradicated the giant trees.

It is still a beautiful place, but when I gaze on the immensity of those stumps I wonder how people could have cut them all down and carted them away. They are like Grandmothers in my mind, Grandmothers slaughtered. For what? For buildings, and shingles, that so often just burned to the ground…

In spite of such thoughts I did enjoy the novelty of a sunny winter day on the trail. People and their dogs were out in force and the going was easy. Sunlight filtered gently through tattered drapes of hanging moss and a delightfully warm breeze wafted across our cheeks. 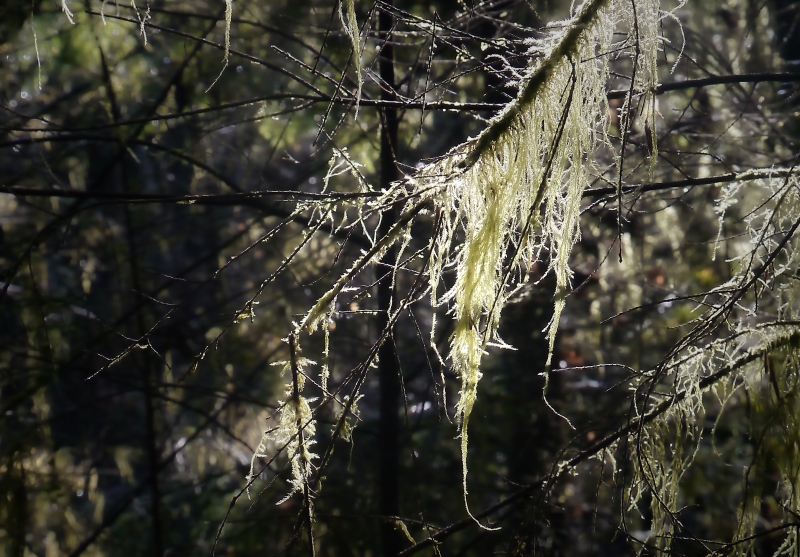 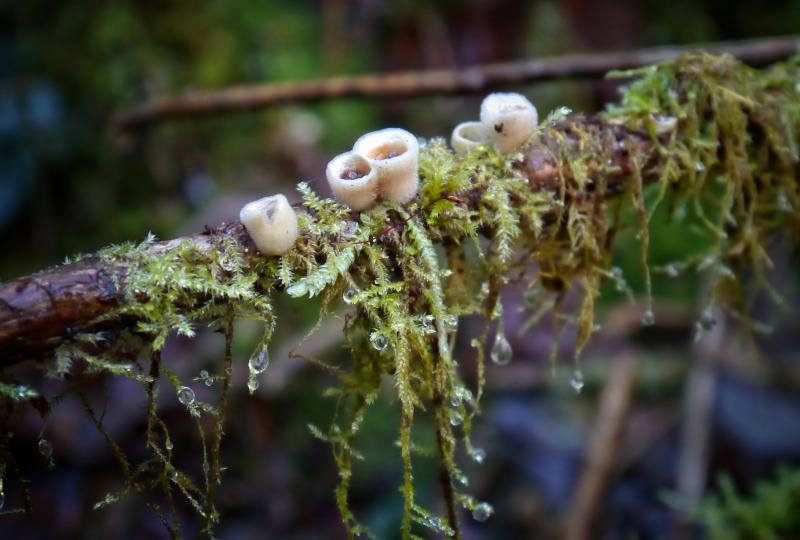 Scrutinizing the forest floor beside the path, I was excited to find an unusual little fungus, called Bird’s Nest Fungus. These tiny fungi have spores concentrated in little discs at the bottom of the cup-shaped body. When a raindrop splashes at just the right angle, out pops a disc of spores.

Bird’s Nest Fungus from above – it was a sunny day but in this cool, shady pocket, raindrops persist on the moss. And there was something even more amazing today in this low, cold spot alongside the trail… 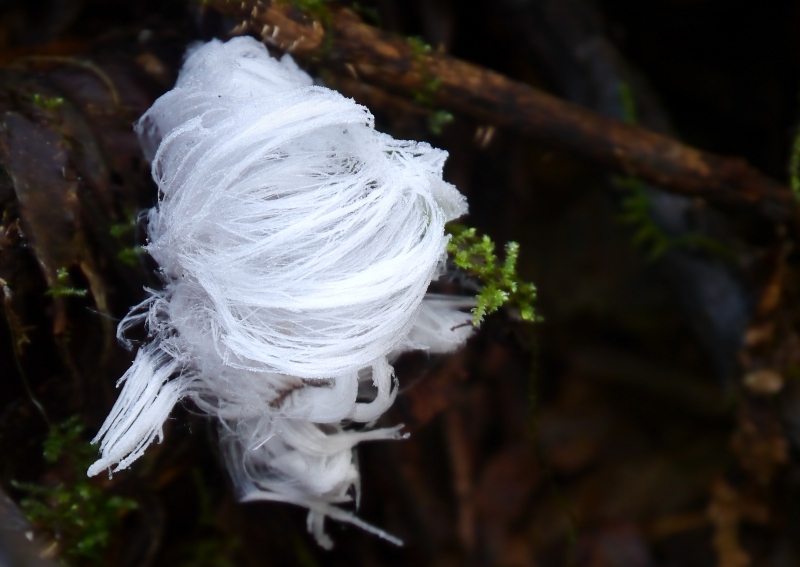 Yes, it’s ice. It forms under special conditions, often on the branches of Alder trees, which are plentiful in parts of this forest. Apparently a bacteria living inside alder wood causes water freeze at a slightly higher temperature than it normally would. When that happens, water inside the branch expands and squeezes out of little cracks and fissures in the bark. If the air temperature drops below freezing, then the ice stays frozen in place, curling up in hair-like tendrils.

Like so many small things in this forest, it remains undisturbed. Sunlight doesn’t reach this corner; wind is rare. Only a careless person or an animal walking by might knock it off. I was tempted to touch it but was afraid I would break it, so I resisted the impulse.  I’ve seen this phenomenon in photos on other blogs, but never in person until this day. What a treat! 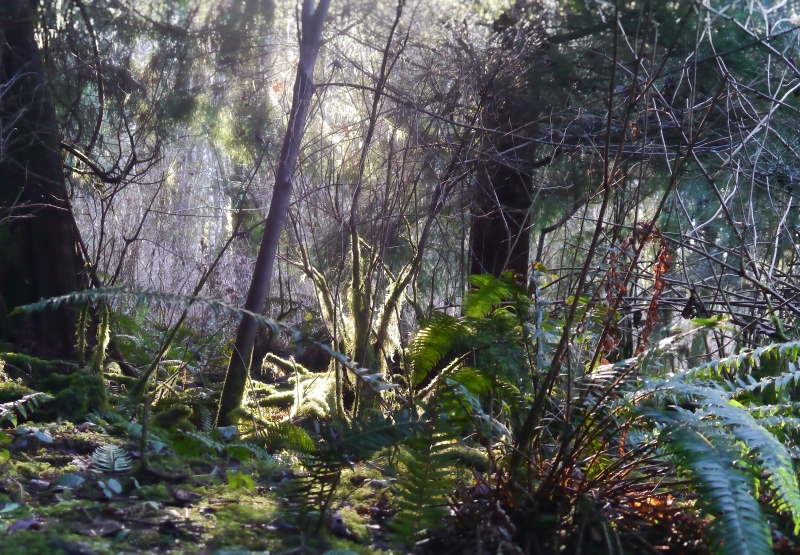 From close to the ground the riot of growth looks chaotic.

These common lowland forest trees are often multi-trunked and typically host heavy loads of moss, lichens and epiphytic plants. It looks like this tree grew up around an old cedar stump which eventually rotted. It’s plants growing on plants here in the moist, shady forest. 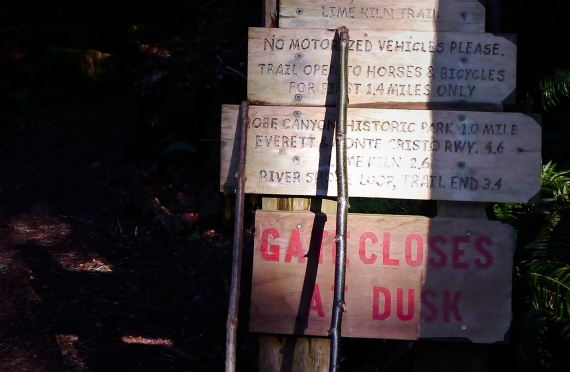 Sun’s getting lower – time to head back. Someone has left two walking sticks for the next hikers… 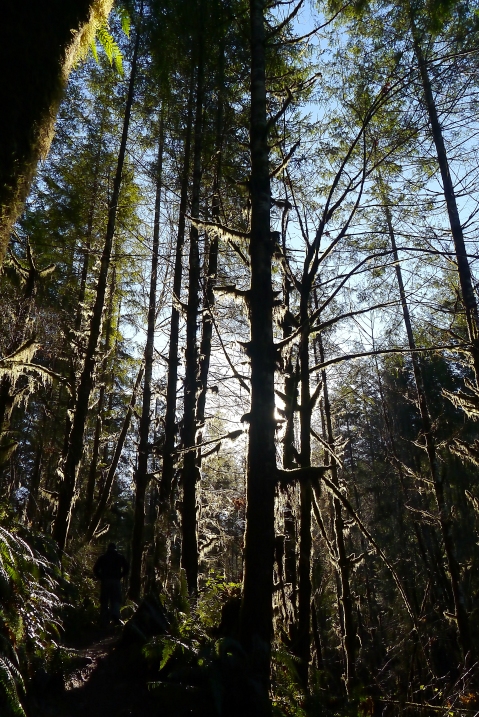 A last glance at the forest. In the upper left corner another Big Leaf Maple sports Licorice ferns. The trees straight ahead are a mix of Douglas fir, Western Hemlock and Red Cedar. Forests in this part of the world support lush, dramatic growth but usually do not have a large variety of tree species, which makes it easy to learn to identify them.

I enjoy the identification game – figuring out what species I saw and reading about them when I get home – but I believe that fully being there with the living things of the forest- smelling, touching, listening, looking – is the ground on which the rest of our knowledge can flower.  I’ll be getting out in the woods again, sun or no sun, as soon as I can!