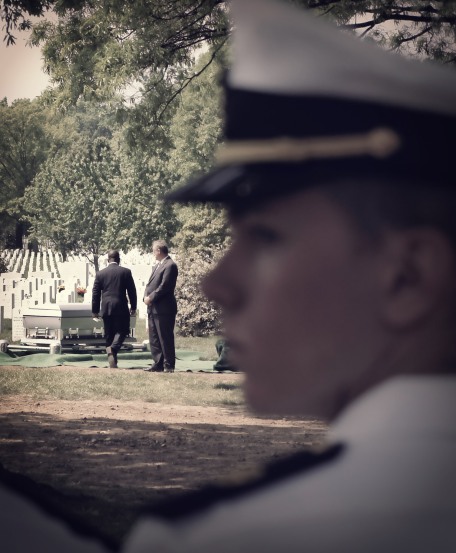 Never above you, never below you, always beside you.

Marine Sgt. Sean T. Callahan, whose remains rest in the casket above, was killed by an IED in Afghanistan two years ago. My son was in the same battalion and really liked Sean for his quick wit and straightforward sensibility.  I came to know Sean’s parents that year as our small group of Marine Moms and Dads supported each other through the long days and nights of our sons’ deployment.

As Sean’s father said the other day, Memorial Day is not just about beaches, BBQ’s and beer. Before he lost his son that idea was lost on him, as it probably is on most of us.  If you don’t take a moment today to remember, do it soon. And don’t forget all the men and women who have suffered and are living with serious physical and mental injuries as a consequence of their involvement in this war.

This week’s Daily Post Weekly Photo Challenge, “In the Background”  is to take a photograph of yourself or another person, putting the emphasis of the image on a different area, not on the person.  This photo, which I took two years ago during Sean’s funeral at Arlington National Cemetery, is my response to the photo challenge.

It also serves as a reminder of what Memorial Day was intended to signify.   The young Marine in the foreground was part of the Honor Guard on that difficult day. What was he thinking?

More responses to this weeks photo challenge can be seen here.