Tides nourish the land, and their dependable changes remind me that if life is difficult now, it will get easier…

This week’s Daily Post Weekly Photo Challenge is “Change.”  The serene view above is minutes from a  busy New York City highway. Maybe the beautiful colors were caused by pollution, but that thought was far from my mind as I sat on the beach that evening, lost in the sound of gently lapping waves and the changing hues of sunset. 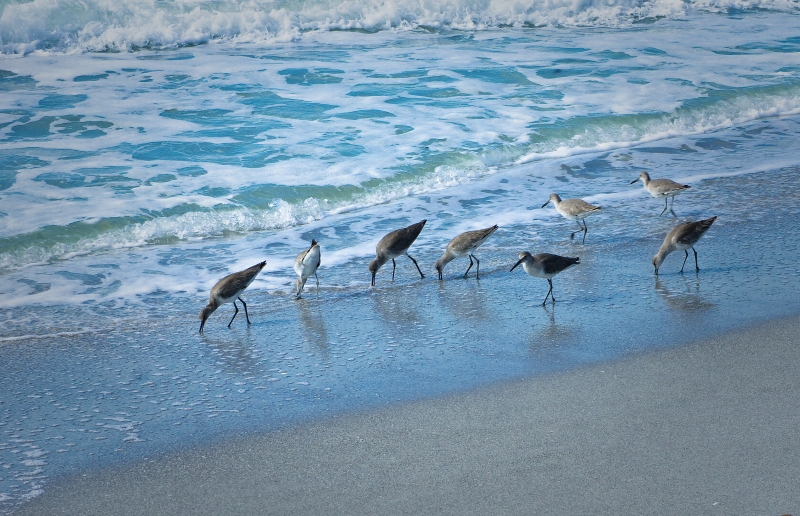 A receding tide offers foraging opportunities for Willets on Captiva Island in Florida.

The ebb tide lends itself to soft focus, also on Captiva. 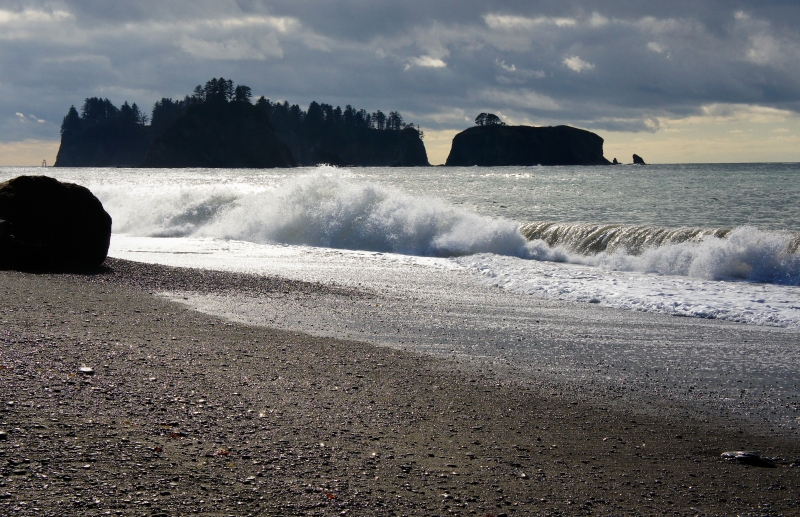 Just after high tide, the noise is deafening as waves crash hard onto the rocky Washington shores of Rialto Beach.  Bit by bit, centuries of changing tides have carved a dramatic seascape here.

Happily, the only buildings in the area are well out sight – it’s just rock, water, and sky as far as you can see. 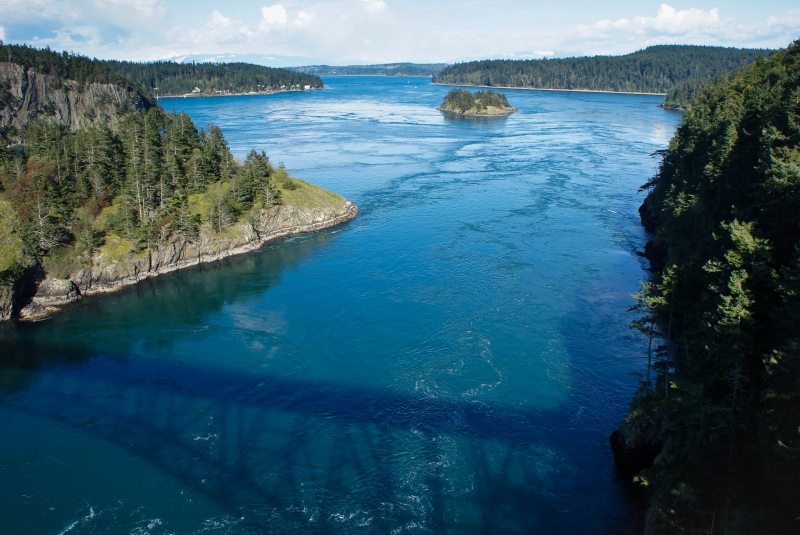 Deception Pass divides two northern Washington islands. Water from the Strait of Juan de Fuca, separating Washington from Canada, is sucked in to Skagit Bay through this narrow passage, creating whirlpools and eddies.

The bridge whose shadow you see was built in the 1930’s – it’s WAY up over the pass, but if you’re not subject to vertigo you can walk across it.

On the  bridge, you can look east towards Swinomish Indian lands,

watch the incoming tide as it ripples and flows,

and gaze straight down into paisley water swirling a tidal song of change. 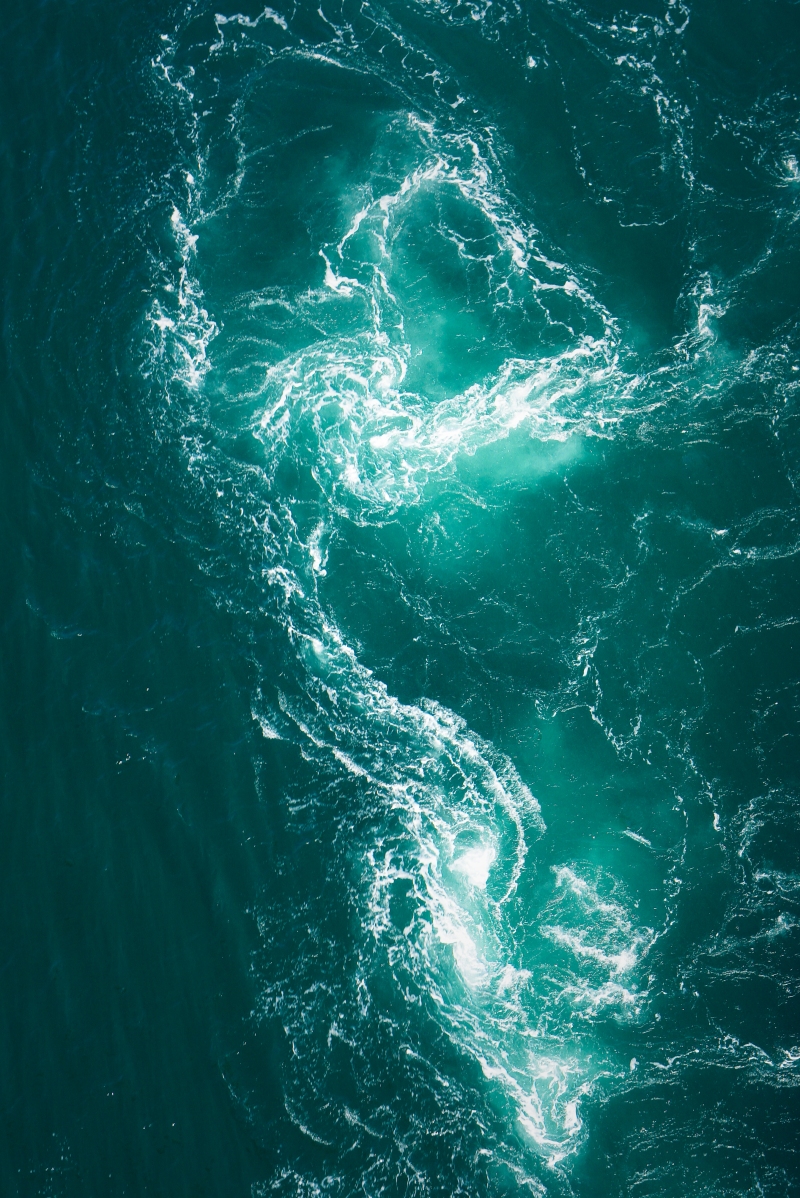 Just to the north, on a rock in Rosario Bay, a gull perches precariously as an incoming tide approaches gently, leaving soft herringbone patterns on the Pacific blue waters.

In the intertidal zone the tide pools are slowly filling back up, wafting kelp in open circles.

Sea anemones (Anthopleura elegantissima), packed tightly into the tide pools, have closed up shop as the tide is out, but a few are starting to reach their tentacles out into the shallow, nutrient rich water.

At Salt Creek Recreation Area on the Olympic Peninsula the tide is halfway out, exposing a dizzying variety of colorful seaweed on the rocks. 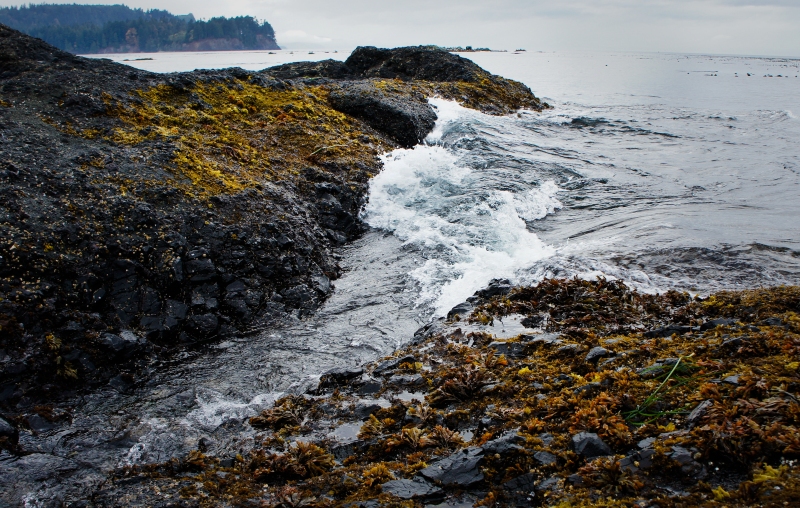 Mussel shells tangle with seaweed on the rocks at my feet. It’s getting late, but gulls, cormorants and ducks will feast here til dusk. Tidelands along the Strait of Juan de Fuca  support a complex ecosystem of plants, invertebrates, numerous species of fish and shellfish, porpoises, whales, sea otters, birds…I’m sure there are other living things I left out. People, for example!

In Seattle the ocean is a hundred miles away but the waters are still subject to tidal changes.

Looking west towards that distant ocean, the Olympic Mountains draw a ragged edge on a golden sunset as a lone pleasure boat heads north on an ebb tide.

More Weekly Photo Challenges on the topic of Change – a BIG one! – can be found here.